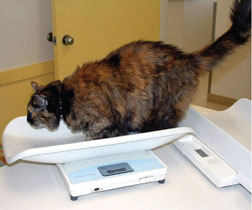 Why Cats Are Fat, and What to Do

When a normally thin publication like Waltham Focus, an international journal for companion-animal veterinarians, stuffs an issue (Vol. 16, No. 1) with details on the pet “obesity epidemic,” we tend to look up from dinner to question: Have veterinary researchers discovered the cause of the flabby feline? How do they know which cats are catastrophically overweight? And what should we do, Doc?

The numbers are simple enough, at least. About 20 percent of cats in industrialized countries of the world are obese in the 21st century – an increase from practically no feline obesity – in 1970. Feline obesity is at its height (width?) in middle-age cats, the researchers report, and it becomes less of a problem in older cats.

Cats with more than 30 percent body fat are candidates for a diet. Instructions for calculating the feline body mass index are at this Web site: http://felinediabetes.com/FelineBMI.pdf.

Surprising Facts, and Other Kinds

The very scientific researchers reporting in Waltham Focus give three reasons for feline obesity, and we will interpret: “Sensorily induced overconsumption, hedonistically mediated maladaptive food choices and errors in processes governing energy balance.” In other words, food smells and tastes really good, so too much is eaten; eating lots of calories is fun; and the signals that say “enough is enough” can get lost in the mix.

Moist or semi-moist cat foods at dinnertime arent making American cats too tubby, according to the Waltham researchers. Rather, it is the dry food left in the dish around the clock that is to blame. Obesity is sure to occur, they say, “when palatable food is available in excess and hard physical activity is not required.”

Dogs will be dogs, but among cats, the researchers suggest: “The risk of obesity is greater in animals that live alone or with one other cat, in comparison with households with three or more cats.”

We know some of this already, but heres more to ponder while driving (jogging?) to the animal shelter to donate dry food and adopt more cats: In the wild, cats spend two-thirds of their time hunting. Only one out of every 15 hunting expeditions is successful. Eating is not necessarily a social activity for cats, which are solitary animals. Hunting and eating “are motivated by factors that are independent of one another,” according to the Waltham researchers.

No, bad idea. Maybe dogs can benefit from increased exercise. But with housebound cats, increased play only burns off so many calories. Serious dietary change is in order, and that doesnt mean simply reducing portion size because that can lead to nutritional deficiencies in cats. Rather, obese cats need a diet with fewer calories, and thats where the veterinarian knows best.

Even the most up-to-date veterinarians may scratch their heads about scientific uncertainties in weigh-reduction diets: Controversy still swirls around the hunger-satisfying properties of dietary fiber, for example. And what about the role of special ingredients and nutraceuticals in weight-loss diets?

Thats too much, the researchers imply, for amateurs and their cats to ponder on an empty stomach.