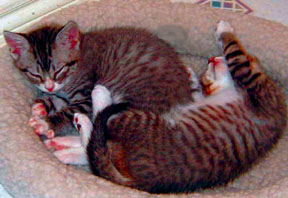 Patience Heals Most Kitten Behavior Problems
Along with the joys of raising a kitten through its first rambunctious year of life come certain behavior problems – like lapses in litter pan etiquette, squabbles with other cats and occasional aggression toward humans.

A year-long study of 126 kittens adopted from a Broward County, Florida animal shelter found that 50.8 percent of the pets had tested their humans affections with at least one behavior problem – and that some had committed all three kinds of behavioral offenses – but that almost all problems were resolved within a year.

Reporting in the Journal of the American Veterinary Medical Association (Vol. 224, No. 11) on Prevalence of house soiling and aggression in kittens during the first year of adoption from a humane society, psychology researchers at Georgias Mercer University had some advice for impatient humans: Give those naughty kitties a second or third chance before returning them to the pound.

The study was done because of the high return rate at animal shelters. Nearly 35 percent of cats dropped off at shelters had been adopted there less than a year before. A quarter of the drop- offs had less than seven months to prove themselves to their new families.

On the other hand, cat aggression toward people is a health concern, the researchers noted. Approximately 400,000 cases of feline aggression are reported every year in the United States, while 50 percent of cat-bite wounds become infected.

The researchers phoned kitten adopters four weeks, 18 weeks and 52 weeks after the adoptions to ask three questions: Has your kitten been urinating, defecating or spraying outside the litter box? Has kitty been fighting with other cats?  And how about with you? Any aggression toward humans?

Indeed, there were behavior problems to report – lots of them – in the first month or so.  But, perhaps because the kitten-adopters knew they were being monitored, most continued to work with their new pets. And, miracles of miracles – many of the problems were solved by the end of the first year.

The researchers had this to say about the virtue of patience: If owners can be encouraged to keep their kittens past the initial month of adoption, the prevalence of serious behavior problems can be expected to decrease by 50 percent.

What Cats Should Eat
Commercial dry cat food typically contains about 50 percent carbohydrates – going heavy on starchy ingredients like corn, wheat, rice and other cereal grains – for a reason that has nothing to do with cats welfare. Rather, those extruder machines that spit out dry bits prefer starch because too much moisture, protein or fat gums up the works.

That factoid can be found in the article, What Cats Should Eat, in the Journal of the American Holistic Veterinary Medical Association (Vol. 22, No. 2-3). As might be expected, the holistic journal isnt fond of commercial cat foods. But the publication offers one piece of advice that many experts agree on: Try to simulate the diet of pre-domesticated hunting cats – which ate prey animals such as rodents, rabbits, birds, lizards and insects – by feeding your cat mostly water, protein and fat and limiting carbohydrates to about 10 percent of the total diet.