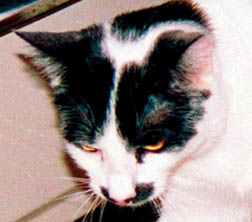 Eight New Skin Diseases of Cats
Remember when dogs had skin problems and cats just had attitudes? Get ready for Eight emerging feline dermatoses, as chronicled by University of Tennessee veterinarians in the journal Veterinary Medicine (Vol. 99, Issue 5).

In no particular order, the awful eight are:

Malassezia dermatitis starts with resident yeast that takes over when underlying conditions weaken the immune system. Thirty days of antifungal medicine is the treatment.

Facial dermatitis in Persian cats has no known cause or treatment, but repeated washing removes the unsightly black wax that mats Persians fur.

Bowens disease is patches of squamous cell carcinoma that could become malignant. Surgery to remove the cells, radiation therapy or applications of imiquimod cream can help.

Feline skin fragility syndrome produces easily bruised, translucent skin that tears off in large sheets. The prognosis is grave, according to the journal.

Herpesvirus and calicivirus dermatitis may be the first visible signs of those diseases. Antiviral treatment with interferon can be costly, but cheaper lysine may help.

Idiopathic ulcerative dermatosis. Again, no known cause, but surgical removal of the ulcers can stop the cat from self-mutilating.

Paraneoplastic alopecia is hair loss connected with pancreatic or liver cancer. The often-fatal cancers are considered more serious than the skin disease.

Why Stray Cats Roam
If your mission in life is to fill the planet with genetic copies of yourself, should you: (a) stay home with your mate or (b) cover lots of territory and mate with whomever will have you?

The best gene-pool strategy – if youre a stray male cat in Lyon, France – is to roam, according to an article in Animal Behaviour (Vol. 68, Issue 1) titled, Spacing patterns in a social group of stray cats: effects on male reproductive success.

The three-year study of feral cats near a large hospital chronicled the soap-opera lives of females, which establish territories around five sites where hospital workers set out food each day, as well as males with a whole different definition of territory. Researchers were testing a theory advanced more than 30 years ago to explain promiscuous bird behavior: If females cannot be easily monopolized, the theory says, males may adopt nonterritorial tactics and mate opportunistically.

Evidently, cats are like birds in one respect. When the researchers ran DNA tests on all the newborn kittens, they reached one conclusion: The males that spread the most DNA around town were the toms that roamed the farthest.

As to why the lady cats cry, the researchers said theyre not pining for a lost love. Female cats behave in ways that promote conflict between males, the scientists noted. As estrus approaches, females increase the probability that several males find and then compete for them with typical vocalizations.

And when feline Casanovas, as the song goes, slink down the alley, looking for a fight, howling to the moonlight on hot summer night, perhaps theyre bragging about their widely sown genes.