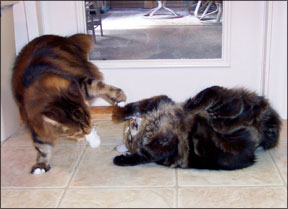 In a recent issue of the Journal of the American Veterinary Medical Association (JAVMA Vol. 233, Number 4), the article, “Evaluation of inciting causes, alternative targets and risk factors associated with redirected aggression in cats,” describes a typical case of redirected aggression like this: Your indoor cat is watching through the window. Along comes a neighborhood cat, which makes your

Redirected aggression is one of the most commonly reported problems to animal-behavior experts, who take the problem seriously: “Bites from aggressors are uninhibited, attacks are usually difficult to stop, and aggressors typically remain highly aroused long after the inciting event is over,” according to the JAVMA report. Sometimes all it takes is a loud noise to trigger an episode of redirected (also called displaced) aggression. (For more information on cat fights, please see related article on page 3 of this issue.)

When Frannie, the normally docile feline in the ShortTakes office, suffered a bout of feline hyperesthesia syndrome (FHS), her tail twitched, skin rippled, pupils dilated and she ran around like a crazy cat.

When we reported this mysterious behavior (September 2008 CatWatch) we asked for reports from other cat owners. That triggered responses from cat owners Julie, Rita and Catherine, who reported similar experiences with cats named MacPuff, Groucho, and Rocky and Greta.

MacPuff had one additional sign that we might have missed in Frannie: “His paw pads, which were usually a very pale pink, would turn deep pink, nearly fuchsia, and be hot to the touch,” Julie reports.

Recently Groucho began attacking her tail, according to Rita: “Groucho would literally hold her tail down as the tip continued to twitch, and she would attack it, sometimes running in circles, her pupils dilated. I pretty much knew it was FHS and felt that it was brought on by two of my other kitties constantly tormenting her.”

Because Groucho and a younger cat in the same house, Rocky, have the same mother (Rocky has a much milder case of FHS) and both are teased by other cats, Rita draws this conclusion: “FHS is inherited and brought on by stress.”

At first Gretas veterinarian – like Frannies veterinarian – was puzzled by FHS, and offered no solution. Then, in the midst of a weekend-FHS episode, Catherine took Greta to a different vet at an emergency clinic. That vet had a hunch: Perhaps Gretas ear canals were impacted with mites. Further investigation proved the hunch correct, and once the infestations of mites were removed from deep in Gretas ear canals, the episodes of FHS stopped.

And heres the happy ending: Catherine suspected that Gretas mites might have come from Bismarck, a new cat she had adopted from a shelter. When she took Bismarck to have his ears checked, the vet noticed an abnormally high heart rate and a heart murmur. “Turns out Bismarck had hypertrophic cardiomyopathy,” Catherine reports. “With medication, he lived for another 11 years.”