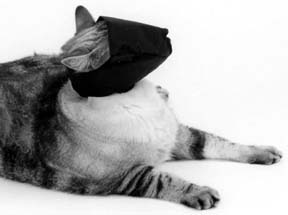 No Excuse for Urine Marking
Urine marking – that annoying behavior when cats spray doorways and other sites with their liquid calling-cards – might have a medical excuse for some cases, but not all. At least thats what veterinary researchers at University of California-Davis and Washington State University figured when they started a study, as reported in the Journal of the American Veterinary Medical Association (Vol. 223, No.4).

Their study covered 58 gonadectomized (or fixed) cats with a history of urine marking and 39 others without the habit. Marking behavior was defined as spraying urine on vertical surfaces. Urinating on horizontal surfaces, as troublesome as it is beyond the litter box, was not counted as marking.

The researchers wondered if lower urinary tract disease (LUTD) was prompting some cats to urine mark and whether urinalysis (to look for bacteria, casts and crystals in the urine) would give some urine-markers a medical excuse. Sorry, kitty, but youd better try a different story. The urinalysis study found no more LUTD in urine-marking cats than in those who didnt.

Male cats and those in multiple-cat households are the most likely to engage in urine marking, according to the journal article. It called problem urination (on vertical as well as on horizontal surfaces) the most common behavior problem in cats for which veterinary consultation is sought.

And thats what human companions of urine-marking cats should do – get help – the article advised. But just to be sure, the researchers said, a behavior specialist will want to check for medical problems before treating the misbehavior kind.

When Veterinarians Bite Back
Dont be surprised if your pet is muzzled, to prevent biting, the next time she visits the veterinarian. The veterinarian is only following advice of researchers who studied Risk factors for bite wounds inflicted on caregivers by dogs and cats in a veterinary teaching hospital, as reported in the Journal of the American Veterinary Medical Association (Vol. 223, No. 3).

The teaching hospital in question was that at the University of Pennsylvanias School of Veterinary Medicine, and, like most other veterinary practices, theres a whole lot of bitin going on in Philadelphia. Overall, animals bite an estimated 4.7 million people each year in the United States. An earlier survey in Wisconsin and Minnesota found that dogs and cats had bitten 92.3 and 81 percent of veterinarians, respectively.

The risk-analysis study analyzed probabilities of being bitten under various circumstances, and researchers found one surprising result: Caregivers were more likely to be bitten by dogs or cats that had warning signs on their cages indicating the potential to bite. Also at higher risk for bites were veterinary caregivers working with cats (of any age) and with older (and presumably crankier) dogs and cats.

While checking their own clinic, the University of Pennsylvania veterinarians found that fewer than half the pets that might be expected to bite were muzzled during treatment. That led to the recommendation: Muzzling dogs and cats should be considered more frequently.

As for all those bites at cages with warning signs, the researchers offered this explanation: Wariness or anxiety of the caregiver may increase the risk of being bitten.