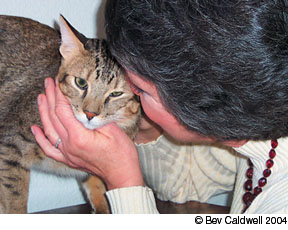 Long-term management of diabetes mellitus in cats requires regular measurement of blood glucose concentrations to determine how much insulin cats need to survive. And that has usually meant another trip to the veterinarian.

Researchers at Switzerlands University of Zurich, reporting in the Journal of the American Veterinary Medical Association (Vol. 225, No. 2) gave cat owners a chance to test their diabetic cats at home, using portable blood glucose meters and taking a couple of drops from their cats ears every couple of weeks. Their conclusion in the study that lasted nearly four years: Owner compliance with long-term home monitoring appeared to be satisfactory.

The Swiss study followed an earlier home monitoring experiment by another institution that had noted less-than-satisfactory results. In that experiment, the cats didnt actually have diabetes, but owners were put through the motions of testing them just to see if they could manage. Apparently, the healthy cats grew weary of having their ears pricked and the owners got tired of being scratched.

Researchers noted the key difference, saying: All cat owners in the study of this report believed that home monitoring had raised their self-confidence with regard to their ability to manage the disease in their pets.

Of all the things humans and cats have in common, one of the most  bothersome for both species is urinary bladder inflammation. In cats, veterinarians dont know what causes the majority of these painful episodes, but they give the condition a name, anyway: feline idiopathic cystitis (FIC). Among humans with bladder infections, physicians arent always sure, either, but the bill will read interstitial cystitis (IC).

Physicians have had some luck lately in treating human urinary tract infections with glucosamine.  Veterinary researchers in Scotland figured: Why not try glucosamine on cats? One recent hypothesis suggests that FIC may result, in part, from alterations in the protective layer of molecules attached to the cells that line the bladder. Those molecules of glycosaminoglycan (or GAG) become damaged, allowing microbes and crystals in the urine to irritate the bladder. Would glucosamine repair the GAG layer?

The six-month experiment on 40 housecats – of whom 20 received daily glucosamine tablets from their owners and 20 received placebo pills – was reported in the Journal of Feline Medicine and Surgery (August 2004).  The Scottish researchers admitted that they were baffled by the results: There was no significant difference between the glucosamine cats and the placebo cats – almost all improved and suffered fewer incidents of FIC.

So the Scots offered three possible explanations:  (1) Maybe the GAG theory is wrong. (2) Maybe water helps. Most cat owners in the experiment had been feeding more canned cat food and less dry food than before the experiment began. Or (3), and youll love this one, the so-called profound placebo effect had come into play.  Giving a capsule each day and paying attention to the cat by looking for signs of cystitis may have resulted in the cats receiving more attention from their owners, the researchers wrote. If increased owner attention was associated with increased stroking and petting, it could have acted to calm the cats. Stress has been suggested as a possible trigger for both IC in humans and FIC in cats.

We wonder what urologists will charge for petting.