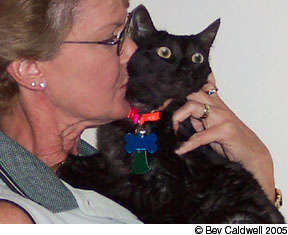 Are We Attached Yet?
Twenty five years after a landmark study established stereotypes regarding the personalities of pet owners, those curious sociologists are at it again – trying to learn why so many of us keep all those critters around the house. Reporting on Pet Attachment and Personality Type in the journal Anthrozoos (Vol. 18, No.1), Debra K. Bagley and Virginia L. Gonsman confess surprise at their findings.

Since then, Americans have accumulated a lot more cats to love (approximately 78 million pet cats, compared to 65 million dogs, according to the American Pet Products Manufacturers Association).

The latest  attachment study used a survey instrument called the Keirsey Four Types Sorter to label people as Idealists, Rationals, Artisans or Guardians. Survey questions from the Lexington Attachment to Pets Scale were asked of 163 people who currently or previously owned cats, dogs or both.

Show This to Your Landlord
Another article in the same journal says renting to pet owners is generally more profitable for landlords, that tenants tend to stay longer in pet-friendly rental units, and that these rental units stay vacant for less time because there are more applicants (and their pets) in the applicant pool.

The Cat That Swallowed the Canary
Cats arent supposed to be this careless (dogs gobble first and ask questions later), but X-rays dont lie. Reporting in the Journal of Feline Medicine and Surgery (Vol. 7, 2005) on Chronic esophageal foreign body in a cat, British veterinarians reveal what was making the 11-year-old shorthair (which should have known better) choke and regurgitate for two months: a rather sizeable clavicle bone from a wild bird. Surgery removed the bird bone and the cat is doing fine, presumably vowing to chew thoroughly before swallowing.

Hats Off to a Special Cat Owner
A Berwyn Heights, Maryland cat owner has been cited for extraordinary devotion to her pet, Genie, who might not be here today without some extraordinary teamwork. As reported at the Baltimore meeting of the American College of Veterinary Internal Medicine, Genie was originally diagnosed with a heart murmur as a kitten. Then the murmur developed into congestive heart failure after Genie was hit by a car when she was two years old. It took three veterinary specialists to surgically remove a fistula that was causing heart failure.

But the veterinarians credit owner Denise Benoit for doing the rest. She quit her job to tend Genie – sometimes coming into the clinic at 3 oclock in the morning – feeding the recovering cat with a tube and drawing excess fluid from her chest. We dont have children, so Genies recovery meant everything to me, Benoit explains.

Now four years of age and relatively healthy, Genie still has hypertrophic cardiomyopathy, which may shorten her lifespan. Bills for the surgery and postoperative care have topped $6,000. I cant put a price on her life, Benoit says.