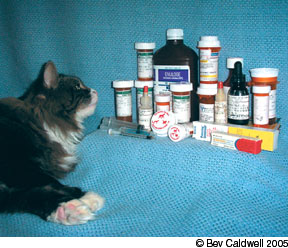 Are We Shortchanging Cats in Pain?

That is the finding of Tufts University researchers, who said they werent picking on the School of Veterinary Medicines clinic at Tufts. The same problem – insufficient pain medication for cats – probably exists at many clinics, they wrote in the Journal of the American Veterinary Medical Association (Vol. 227, No.3).

As to why cats in intensive care were less likely than dogs to get pain meds, the researchers said the shortcoming may reflect poor recognition of pain in cats and suggests the need for additional research.

Most Cats Respond to Lymphoma Chemotherapy

A study of 38 cats receiving chemotherapy for lymphoma, as reported in the Journal of the American Veterinary Medical Association (Vol. 227, No. 7),  found that more than 80 percent of patients receiving the so-called University of Wisconsin protocol had complete or partial remission.

At the University of Floridas College of Veterinary Medicine in Gainesville, where the feline lymphoma study was conducted, 47 percent of the cats on the Wisconsin protocol (methotrexate in combination with six other  chemo drugs) had complete remission, meaning that their tumors and clinical signs disappeared, and 37 percent had partial remission.

While most of the cats (ranging in age from one to 21 years) got a new lease on life, nothing lasts forever.  Cats lucky enough to have complete remission survived less than two more years (average of 654 days)  and those in partial remission lasted less than four months.

The Society for Veterinary Hospital Pharmacists has issued a warning: Dosing pets with date-expired prescription drugs can be hazardous to their health. According to SVHP president Starr Miller, outdated tetracycline can give cats black, hairy tongue while expired antibiotics can cause gastrointestinal problems. A national survey found only 31 percent of Americans check expiration dates on their own prescription medications, Miller says, and the situation could be even worse with pet pills: I think its a real issue, she says. Everybody likes to keep whatever they have in their cabinets for the next time they may need it.

Still on the topic of pills for pets, the American Veterinary Medical Association is concerned about Australian Web sites that sell mail-order veterinary drugs – without prescriptions – to customers in the United States. Mail-order sales are legal for customers in Australia, because some veterinary drugs there do not require a prescription. The Aussie Web sites are therefore considered retail outlets and not pharmacies.

The AVMA has a point: Importation of foreign animal drugs that are not FDA-approved is forbidden. Administering such drugs may even be dangerous, because they have not met federal requirements for safety and effectiveness.  Heres our suggestion: If your cats meds are costing you a fortune, discuss it with your veterinarian. There may be cheaper, safer – and legal – sources.