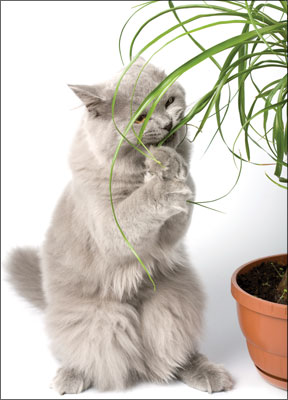 A study in the Journal of the American Veterinary Medical Association (Vol. 234, No. 2) found that some dietary supplements dont dissolve fast enough to be absorbed by cats and dogs.

The report was titled “Composition, disintegrative properties, and labeling compliance of commercially available taurine and carnitine

dietary products” and said that two out of three (labeling and composition) were adequate.

Researchers concluded: “Taurine and carnitine products evaluated in this study closely adhered to manufacturer claims and labeling guidelines. However, disintegration testing suggested high variability in some products, possibly limiting uptake and use by animals that receive them.”

Frannie, the ShortTakes feline office manager, is a strictly indoor kitty – posing little threat to the finches feeding just outside her window. So she has plenty of time to paw through scientific journals like Animal Behaviour (Vol. 76, No. 6) and draw attention to provocative titles like this: “Can foraging birds assess predation risk by scent?”

Thanks for the pointer, Frannie. Heres what we learned – from a quirky but harmless experiment by researchers at Indiana University. They wondered what would happen when finches – busily feeding on birdseed – detected the smell of a potential predator (a cat) and a similarly sized mammal that posed no threat to birds (a rabbit).

The cat and rabbit smells were represented by liquefied cat feces and rabbit feces, respectively – wafted into the bird-feeding stations by electric fans. As a scientific “control,” the scientists also exposed the birds to the scent of plain water.

The smell of water had no effect – the finches kept on feeding – but feces was disturbing. When the “wind” blew either the smell of cats or rabbits, the birds grew uneasy. They ate more rapidly, lingered less at the seed bowl, and flew away quickly. Interestingly, the scent of the predator cats was only a little more effective at clearing the “table.”

A report in Veterinary Medicine (Vol. 103, Issue 12) offers a surprising answer to the question: “Why do dogs and cat eat grass?” Veterinary researchers at the University of California-Davis set out to test three hypotheses: (A) Grass-eating pets are sick and need to vomit; (B) They have a dietary deficiency; (C) Something else.

Their survey of several thousand cat and dog owners found no connection to dietary deficiency in either species. Some dog owners said their pets had tummy troubles before eating grass – then vomited. But “cats typically do not appear to be ill before eating plants nor do they regularly vomit afterward,” the researchers said.

Heres their “something else” idea: Eons ago, wild canid and felid ancestors of modern dogs and cats ate plants to purge intestinal parasites. Now our pets still do – without knowing why.

We found Frannie in the living room, and asked about the Inherited Trait Hypothesis. The descendant of saber-tooth tigers stopped grazing on the tender tips of the ponytail palm tree – and actually seemed thoughtful. Then she spit slimy plant stuff on the carpet. It had never reached her intestines – where we hope no parasites were waiting.