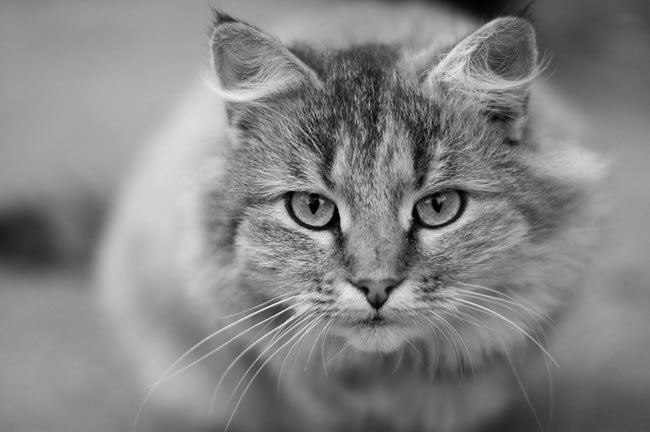 DNA Analysis Reveals Clues to Semi-domestication
An international team of researchers has analyzed results of the cat genome – the complete mapping of DNA and genes – to arrive at a greater understanding of cats domestication.

They compared the genomes of domestic and wild cats and found that areas of the domestic cat genome differed significantly from their wild counterparts, including genes involved in the reward centers of the brain and the development of neurons that produce dopamine, which helps control the brains pleasure centers. The researchers say that this suggests that the first wild cats bred for domestication were those responding to rewards such as food and stroking.

The scientists also compared the cat genome, which was completed in 2007, with other mammals, including the tiger, cow, dog and human. They say the differences help explain the basis of cats sense of smell, remarkable vision and why theyre almost exclusively carnivores.

While cats have lived with humans for 9,000 years or more, unlike dogs, theyre only semi-domesticated, says Wes Warren, Ph.D., who led the study at the Genome Institute at Washington University School of Medicine. They only recently split off from wild cats, and some even still breed with their wild relatives. So we were surprised to find DNA evidence of their domestication.

Scientists can better understand domestication by identifying parts of the cat genome altered by living with humans, Dr. Warren says.

Among the studys findings about cats biology and survival skills:

– Cats have fewer genes for smell than dogs and rely less on smell to hunt. Researchers did find more genes that detect the chemical pheromone that allows cats to seek out the opposite sex, an advantage for solitary cats compared to dogs living in packs.

– Cats have better hearing, including the ultrasonic range, than most other carnivores to better track prey.

– They have exceptional vision in low light, which gives them an edge when theyre most active at dawn and dusk.

Their fat-metabolizing genes may provide an advantage as a hyper carnivore eating meat-heavy meals. The genes code for proteins that efficiently break down fats.

The study, reported in the Proceedings of the National Academy of Sciences Early Edition, has enabled researchers to jump-start their knowledge about the evolution of cat domestication, Dr. Warren says.

Testing for Mystery Meat
Researchers at Chapman University in Orange, Calif., concerned about the potential for fraud in the globalized food supply and the safety of pets with food allergies, tested 52 dog and cat pet foods for the presence of meat species and mislabeling.

They extracted DNA from 52 foods and discovered 31 were labeled correctly, 20 were potentially mislabeled and one had a meat ingredient that could not be identified.

Of the 20 mislabeled products, 13 were dog food and seven were cat food. Sixteen of the 20 – including four cat food products – contained meat species that were not included on the label.

The report on the study, published in the journal Food Control, says that it was unclear whether the mislabeling was accidental or intentional and at which point in the production chain it took place.