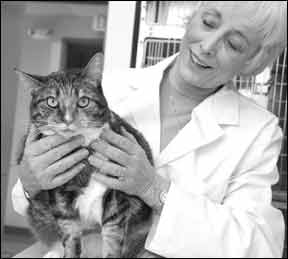 Thanks to the development of screening assays and vaccines for FeLV, the prevalence of persistently infected cats has decreased. Recent studies indicate that the FeLV genetic material remains in cats exposed to the virus, though viral replication may not occur. Concern exists that this persistent viral DNA may ultimately contribute to development of lymphoma in cats.

Dietary management of gastrointestinal (GI) disease is sometimes recommended as a means to control clinical signs, like diarrhea. In fact, fat-restricted diets are often recommended in dogs with

diarrhea. However, recent recommendations suggest feeding moderate to high fat diets (e.g., 15-25 percent fat on a dry basis) in cats with diarrhea, though no published studies support either a low-fat or high-fat diet recommendation.

This study (“Effect of diets differing in fat content on chronic diarrhea in cats,” in Journal of Veterinary Internal Medicine, 2011) compared the clinical response of owned 60 cats with chronic diarrhea to dietary management using a digestible high-fat or low-fat diet. Fifty-five cats completed the double-blinded, controlled clinical trial where cats were fed one of the two diets for a period of six weeks.

Owners recorded fecal scores daily using an illustrated fecal score chart. Fecal scores improved significantly with over one-third of the cats developing normal stools. However, there were no differences in the response between the two diets, indicating that the amount of dietary fat does not appear to be an important factor in dietary management of cats with diarrhea.

Unfortunately, feline infectious peritonitis (FIP) can be difficult to diagnose – especially in those cases without abdominal fluid accumulation (called dry or non-effusive FIP). The best method of diagnosis is through tissue analysis of involved organs, which is difficult and sometimes dangerous when dealing with an ill cat. Researchers evaluated the usefulness of several non-invasive assays for diagnosis of FIP (“Performances of different diagnostic tests for feline infectious peritonitis in challenging clinical cases,” in the Journal of Small Animal Practice, 2011).

Twelve possible cases of FIP – of which eight were confirmed – were evaluated retrospectively. The levels of inflammatory proteins were elevated significantly and consistently in cats with FIP. While not absolute, measurement of alpha-1-acid glycoprotein (AGP) can be used to support a diagnosis of FIP.