Lymphoma is the most common cancer diagnosed in cats, and while several prognostic factors have been documented, another factor recently considered to be important is weight loss. Body weight over time may be a simple, objective and useful marker of patient status.

The records of 209 cats being treated for lymphoma with chemotherapy from 1995 to 2007 were evaluated. Cats with large cell lymphoma had a significantly shorter survival time if they had lost more than five percent of their weight at one month of treatment than those that had gained weight or had maintained a stable weight.

However, weight loss and other clinical signs experienced by cats undergoing lymphoma treatment may be a result of the disease itself as well as chemotherapy side effects. Sometimes, it can be challenging to tell the difference. The first two months of treatment may be the best time to begin therapeutic interventions and nutritional support in addition to chemotherapy to decrease weight loss.

Evidence of a New Feline Virus

The investigators screened fecal, urine, blood and nasopharyngeal swab samples from over 600 cats in Hong Kong over a three-year period for picornavirus using genetic detection methods (“Identification of a novel feline picornavirus from the domestic cat,” Journal of Virology, 2012).

They found a novel virus which was ultimately found to be most closely related to — but distinct from — all known picornaviruses. Their findings indicated that infection of cats with this virus was quite common. While the cats tested in this study were considered to be healthy, further research will be required to fully understand the significance of this virus among cats.

Parvovirus in Cats and Dogs

Canine parvovirus emerged in the late 1970’s as a variant of feline panleukopenia virus (FPV). By the early 1980’s, this variant unfortunately was replaced by new variants that infected both dogs and cats. However, it is now believed that raccoons may have played a role in the evolution of FPV and its adaptation to dogs, and re-adaptation to cats.

Through analysis of all of these viruses and variants, the researchers were able to understand and describe the complex sequence of events, involving small changes in the virus were necessary for these changes in host adaptations (“The role of evolutionary intermediates in the host adaptation of canine parvovirus,” in Journal of Virology, 2012).

Furthermore, they found that these changes had to occur together in order for the adaptation to be successful. These findings show how complex this adaptation to new hosts is, and why it is not a common occurrence among viruses. 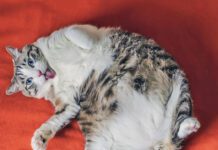