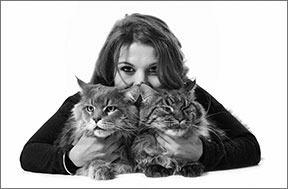 How Do You Compare to the Average Owner?
The American Pet Product Manufacturers Association issues its National Pet Owners Survey every two years — a real door-stopper with more than 500 pages. The findings are intended for businesses, marketers and media. Here’s a sampling from the 2013-14 section about cat owners, who comprise 37 percent of U.S. households.

Overall, cat owners tend to be homeowners with higher levels of employment. More than two-thirds of them live in big cities, according to the survey.

Did You Call?
A team of researchers at the University of Tokyo evaluated 20 cats’ reactions to owners’ and strangers’ voices and offered an intriguing explanation for the results. They measured the cats’ responses through ear, tail and head movement, vocalization, eye dilation and shifting of paws.

The study, published in the journal Animal Cognition, showed that 50 to 70 percent of the cats turned their heads when they heard a human calling their name, 30 percent moved their ears and 10 percent mewed or moved their tails. The percentages were about the same for both owners’ and strangers’ voices, while responses to owners were more intense. However, the cats chose to ignore their owners’ calling them.
The reason the researchers suggest for the behavior: The cats’ unresponsiveness is rooted in their evolution. They “domesticated themselves.”

“Historically speaking, cats, unlike dogs, have not been domesticated to obey humans’ orders,” the researchers say. Genetic and archaeological evidence suggests housecats descended from the African wild cat Felis silvestris 9,000 to 10,000 years ago. They survived by feeding themselves. When humans developed agriculture, the cats preyed on rodents attracted to stores of grain.

Cats and Coyotes
Stray and feral cats avoid coyotes in city parks and nature preserves, and as a result cause less harm to other wildlife there, according to a study conducted at the Ohio State University and published in the journal PLOS One. The cats also live longer and are healthier than previously thought, researchers say.

Researchers monitored 39 free-roaming cats’ health, ranges and other characteristics near six Chicago parks and nature preserves — the city has a coyote population estimated at several hundred to several thousand. The scientists learned that most cats shunned the urban coyotes’ habitats and remained near homes and shops. Most of the cats were in good condition, with only a few mostly minor health problems.

“Free-roaming cats aren’t as diseased and short-lived as we often hear, and they’re not as harmful to wildlife as some other studies have suggested, at least not in urban natural areas,” says the study’s lead author, Stan Gehrt, Ph.D., associate professor of environment and natural resources. ❖