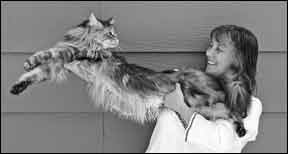 The Impact of Free-Ranging Domestic Cats on Wildlife
A study published earlier this year that estimated free-ranging domestic cats annually kill up to 3.7 billion birds and 20.7 billion mammals has stirred controversy and brought renewed calls for action.

The study’s three authors from migratory bird centers at the Smithsonian Conservation Biology Institute and U.S. Fish and Wildlife Service conducted a “systematic review and quantitative estimate of mortality.” They say “unowned cats,” as opposed to owned pets, cause the majority of the deaths.

Their findings, published in the journal Nature, suggest that, “Free-ranging cats cause substantially greater wildlife mortality than previously thought and are likely the single greatest source of anthropogenic mortality for U.S. birds and mammals. Scientifically sound conservation and policy intervention is needed to reduce this impact.”

Research suggests that domestic cats have considerable impact on wildlife in the U.S. and abroad, says Bruce Kornreich, DVM, Ph.D., Associate Director for Education and Outreach at the Cornell Feline Health Center. “Given the impact of free-ranging cats on wildlife, educating owners about the importance of keeping their cats indoors is crucial. In addition, the release of owned cats who eventually integrate into the burgeoning unowned cat population is a significant problem.”

Equally important is making it clear that adopting a cat is a commitment for his 15- to 20-year lifetime, Dr. Kornreich says. Support of research on novel means of feral cat population control — such as the development of a contraceptive vaccine being studied at Cornell — is also vital in addressing the problem, he says.

Responding to the study, the CATalyst Council, a national initiative of animal health and welfare organizations, points out that some of the killed mammals “were pests, including mice and rats, which reproduce quickly and pose a public health concern when their numbers are allowed to grow unchecked.”

The council’s main concern was its belief that some media reports on the study cast a negative light on all cats. “This works to discourage prospective cat owners from adopting one of the hundreds of thousands of healthy, enjoyable cats held in shelters across this nation,” says Executive Director Jane Brunt, DVM.

The Longest Cat Dies
The longest domestic cat in the world — a Maine Coon measuring four-and-a-half feet from nose to tail — has died. Guinness World Records declared Stewie a record-holder in 2010. He died at the age of 8 after a yearlong battle with cancer. The certified therapy cat touched many lives, says owner Robin Hendrickson. In addition to their remarkable size, Maine Coons are celebrated for their playfulness and trilling chirp