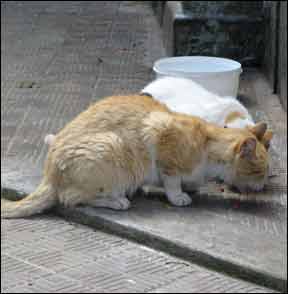 Fish and Flaxseed Oil for Cats
Fish and flaxseed oil are excellent sources of n-3 polyunsaturated fatty acids (PUFA), and both have become popular dietary supplements. These fatty acids can modulate the immune response, and have been used to address canine skin conditions. However, the effects in cats have been relatively unknown.

This study (“Dietary fish oil and flaxseed oil suppress inflammation and immunity in cats,” Veterinary Immunology and Immunopathology, 2011) investigates the responses in cats to fish or flaxseed oil.

Fourteen female adult cats were fed diets that were supplemented with fish oil or flaxseed oil, or a control diet with relatively low levels of PUFA. Their immune response was checked periodically. Decreased inflammation was seen in cats fed the supplemented diets. Fish oil appeared to be more effective in reducing inflammation than flaxseed oil. These supplements may be helpful in managing inflammatory conditions in cats, such as allergies.

Companion Animals and MRSA
Unfortunately, methicillin resistant Staphylococcus aureus (MRSA) is a significant health concern in people. However, relatively little is known the bacteria in companion animals. The study (“Prevalence of and risk factors for MRSA carriage in companion animals: a survey of dogs, cats and horses,” Epidemiology and Infection, 2011) tested healthy and sick animals at various animal facilities in the greater London area for MRSA.

Out of nearly 1700 animals tested — including 540 cats — only 26 animals were found to be colonized with MRSA; of these, eight were cats. In evaluating risk factors among animals for transmission of MRSA, the investigators found that it is rare among companion animals. They also concluded that animals from which MRSA can be cultured are likely contaminated from their human companions, and do not serve as reservoirs for the bacteria.

Study on Trap-Neuter-Return
Despite the numerous trap-neuter-return programs, there have been very few studies conducted to investigate the effects of neutering on free-roaming cat populations. This study (“Demographic differences between urban feeding groups of neutered and sexually intact free-roaming cats following a trap-neuter-return procedure,” Journal of the American Veterinary Medical  Association, 2011) observed 184 free-roaming adult cats and 76 kittens living in four feeding groups in an urban area of Israel.

Over the course of a year, cats in two groups were subjected to the trap-neuter-return procedure (TNR) and the other two groups were left untreated. Of note, the two neutered groups increased in size significantly because of higher immigration (cats moving into the groups) and lower emigration (cats moving away) rates than in the unneutered groups, in which the number decreased.

The study also examined the behavioral differences between the two feeding groups. There was a lower rate of aggressive interactions in the neutered groups than in the unneutered groups. It was also noted that sexually intact male cats participated in more frequent aggressive male-male encounters than did neutered male cats. One group of neutered cats arrived earlier and at a higher frequency of feeding and appearance at the feeding site as compared to unneutered cats.

The decreased aggressive behavior observed in neutered males resulted in reduced fighting and vocalization — potentially leading to fewer injuries and reduced transmission of fight-related infectious diseases. When situations for competition for food occurred, the neutered cats in this study were better adapted to the feeding times and thus gained better access to the food than did the unneutered cats. There were almost no aggressive encounters between neutered-neutered male cats, which may have assisted the visiting cats to integrate more easily into the feeding groups.