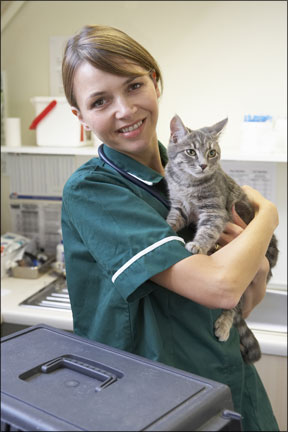 Feline leukemia (FeLV) and feline immunodeficiency virus (FIV) are both serious pathogens of cats that often result in lifelong infection. Routine testing – as well as testing of clinically ill cats – is recommended, and is usually performed by using in-clinic test kits. For FeLV, these assays detect a viral protein, whereas a virus-specific antibody is detected for FIV. A new test system,

Anigen Rapid FIV Ab/FeLV Ag test kit is now available on the European market. These investigators examined the diagnostic sensitivity and specificity of this new test kit on 300 samples using western blot as the gold standard for FIV infection, and polymerase chain reaction for FeLV infection; in addition, results were compared to those attained using the most commonly-used kit made by IDEXX (SNAP Combo).

Detection of Albumin in Urine

Persistent protein in urine with inactive urine sediment is an established marker for chronic kidney disease (CKD), and there is evidence to suggest an association between renal proteinuria and the progression of CKD in dogs and cats. The more marked the proteinuria, the greater the risk for progression of renal disease. This study (“Comparison of urine dipstick, sulfosalicylic acid, urine protein-to-creatinine ratio, and species-specific ELISA methods for detection of albumin in urine samples of cats and dogs,” Journal of American Veterinary Medical Association, 2010) evaluated the use of dipstick, sulfosalicylic acid (SSA), and urine protein-to-creatinine ratio (UP:C) methods for use in detection of albumin in urine.

The UP:C method had high specificity for albuminuria in cats, but low sensitivity (more false negatives). The results of the study in cats showed that when both the urine dipstick and SSA test results were in the trace to 1+ range, the positive results are best confirmed with a more specific-specific ELISA assay. Detection of albumin in urine from cats should always be confirmed with this highest quality assay. The UP:C test resulted in an unacceptable level of false-negative results. This test should not be used as a routine screening test for albumin detection in urine of clinically normal cats, especially for those with low-level albuminuria.