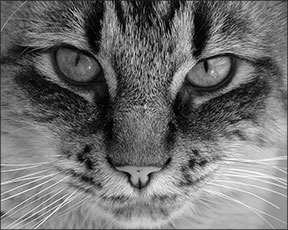 Arthur was diagnosed with chronic renal failure a year ago. Two other teaching hospitals passed on surgery because of potential complications, UGA says. One was that Arthur’s body couldn’t absorb enough of the immunosuppressant cyclosporine to prevent organ rejection.

MSCs are derived from fat, bone marrow and neonatal tissues such as placenta and umbilical cord. Dr. Schmiedt harvested fat cells from Arthur, and the UGA Regenerative Medicine Service grew cells from the sample. Arthur’s transplant involved one surgery to harvest a kidney from the donor and another to transplant the donated kidney. The donor was a cat named Joey, and, as required by the transplant program, he was adopted by Arthur’s family.

Arthur continues to receive stem cell treatments from his veterinarian, and he takes a second antirejection medication, mycophenolate, to help his body accept his new kidney.

Why They Hunt by Night
The unusual shape of cats’ eyes — the slit-shaped pupils — give them an evolutionary advantage as nocturnal hunters. “They can see in almost complete darkness,” says Richard E. Goldstein, DVM, ACVIM, Chief Medical Officer at the Animal Medical Center in New York City and a former Cornell faculty member.

“A cat has the capacity to alter the intensity of light falling on its retina 135-fold, compared to 10-fold in a human with a circular pupil. A cat’s eye has a large cornea, which allows more light into the eye, and a slit pupil can dilate more than a round pupil, allowing more light to enter in dark conditions.”

Cats have other visual advantages, he says, among them is the fact that their eyes face forward on the skull, providing wide binocular vision and depth perception to help catch prey. ❖

For more information, see “How Anatomy Shapes Their Sight” in the February 2014 issue of CatWatch.