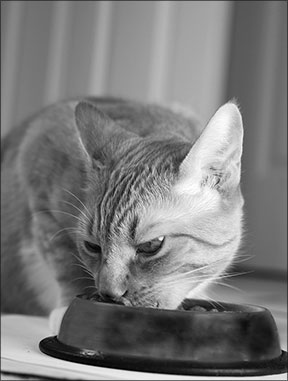 Will Probiotics Protect Kittens from GI Disease?
Researchers at North Carolina State have launched a study to determine if probiotics can protect kittens from deadly gastrointestinal disease. More than 15 percent of kittens at animal shelters in the U.S. die or are euthanized before 8 weeks of age because of illness. The majority have diarrhea or GI diseases, says the Winn Feline Foundation, sponsor of the study.

Preliminary research has shown a strain of the bacteria E. coli called enteropathogenic E. coli (EPEC) is commonly cultured from ill kittens’ feces, and its attachment to intestinal cells is linked to mortality. Healthy kittens, however, have been found to have a form of normal bacteria, E. hirae, attached to the cells.

In addition to studying the role of genetics and behavior, the goals of the research are to identify antibiotics for treatment and to measure the effectiveness of E. hirae or commercial probiotics in treating kittens with diarrhea due to EPEC infection. ❖

Temperature and Light Can Affect Their Appetite
Researchers from the University of Liverpool and the Royal Canin Research Centre in the south of France monitored 38 cats’ food intake over four years to study seasonality’s effect on appetite. The cats ate as much as they wanted at food stations, where microchips on their collars permitted individual access.

The colony cats were healthy European shorthairs and purebreds with a median age of 8. Twenty-five had been neutered. About half were at ideal weight and the others overweight. They lived in groups of eight in indoor-outdoor runs, and caregivers engaged them in play for two hours a day.

While other studies have monitored food intake of farm animals, this was largest research on cats to date. The upshot: Cats ate about 15 percent less in summer. The extra effort to keep warm in winter and the temptation to rest during hot summer days contributed to difference, the researchers say.

The Royal Canin world headquarters in Aimargues was the setting for the study. Its Mediterranean climate has mild, wet winters and warm, dry summers. Periods of high and low food intake coincided with highs and lows in temperature and the length of day. “This seasonal effect in food intake should be properly considered when estimating daily maintenance energy requirements in cats,” the researchers say.

“Cats, like many humans, are more inclined to comfort eat when it’s cold outside but, in their case, it’s likely to be due to the extra energy they need to keep warm when out and about,” says veterinarian Alex German, RCVS, author of the study published in the journal PLOS One.

The take-away: “People should consider the amount of food their cats need at different times of year, as this can be part of helping them to maintain a healthy weight,” Dr. German says.

Update on Jerky Treats
Twenty-four cats and three people have become ill as a result of eating or being exposed to toxic jerky treats, according to an update from the Food and Drug Administration. The effect on dogs has been more widespread. More than 1,000 have died in the past seven years, and the agency has logged reports of illness in 5,600 dogs that it says may be related to consumption of chicken, duck and sweet potato jerky, almost all of them imported from China.

The FDA has worked with a network of laboratories to find contaminants in the treats without success. It has tested for Salmonella, arsenic, cadmium, irradiation levels, pesticides, antibiotics and mold, among other substances, and has asked the Centers for Disease Control to conduct additional studies.
Meanwhile, PetSmart says it will discontinue selling China-made treats by March 2015 and Petco will do the same by the end of this year.

Symptoms that may occur within hours or days of feeding the jerky treats are decreased appetite and activity, vomiting, diarrhea sometimes with blood or mucus, and increased water consumption and/or increased urination.

The FDA asks owners of pets who have experienced signs of illness to report it at www.safetyreporting.hhs.gov. It also cautions that products labeled “Made in the USA” could still contain ingredients from China and other countries. ❖