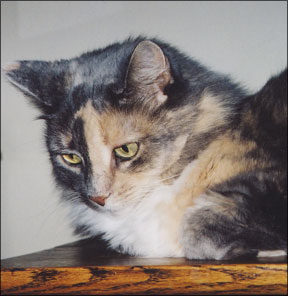 Getting Old, Getting Thin

Theres a reason why feline obesity is a problem mostly for middle-aged cats, and its not that older cats have more time to go to the gym.

A recent report in

Veterinary Medicine (Vol. 101, No. 7) on “Weight Loss in Geriatric Cats” lists disease-related causes for sudden reductions in ounces and pounds, as well as some early signs to watch for. Surprisingly, perhaps, lameness can point to a host of maladies in cats.

In a way, the so-called nonpathologic causes of weight loss are the easiest to resolve once theyre identified. Perhaps the cat is afraid to go to its food dish because a new dog joined the household. Maybe theres competition from a younger cat, a new food isnt as palatable or that kitten is keeping the senior feline on the run.

More serious but still treatable causes of weight loss include cardiac disease; respiratory disease, ranging from chronic sinusitis that decreases a cats sense of smell and appetite to potentially fatal lung tumors; and a host of digestive system diseases. (And dental disease is considered a digestive disorder because bad teeth and gums keep cats from eating.)

Then theres renal disease, several kinds of lymphoma, the endocrine diseases hyperthyroidism and diabetes mellitus, and infectious diseases. A thorough veterinary examination (older cats should go more often) will consider all of these possible causes (and more) for sudden weight loss.

Dont be surprised if the veterinarian asks about lameness. Nervous cats might not walk normally in the veterinary office, but lameness at home can be an early sign of cancer or of diabetic neuropathy beginning to affect the legs.

Researchers from the UK and the U.S., reporting in the

Journal of Feline Medicine and Surgery (Vol. 8, Issue 4) on “Agig changes in cat brains demonstrated by beta-amyloid and AT8-immunoreactive phosphorylated tau deposits,” finally did it. They performed some of the same tests for neurodegenerative disease that other researchers previously tried with brains of aged humans, sheep, goats, bears and wolverines (the gnarly animals, not the University of Michigan football team).

Like other aging mammals, old cats have signs of amyloid plaque and neurofibrillary tangles in their brains similar to those in humans with Alzheimers disease. The feline journal noted that 28 percent of cats aged 11 to 14 years develop at least one “geriatric-onset behavioral problem” and that 50 percent of 15-and-older cats can have the same problems.

This talk of geriatric cats reminds us of Gertie, the longtime

CatWatch “Short Takes” muse whose passing this month were sad to report. She was 20-something years of age, and did, indeed, exhibit a few “geriatric-onset behavioral problems,” none of which was a problem for human friends with good earplugs and a mobile litter box.

Gertie survived bouts with renal disease, inflammatory bowel disease, hypertension and blindness from retinal detachment. Toward the end, she weighed less than some of the museum-quality critters she used to haul in through the cat door. (“Okay, a wood duck doesnt weigh

that much, but howd you catch it, Gertie? And we know where you got the starfish; our neighbor the science teacher wants it back.”)

She let us know when it was time to go. A veterinarian who makes home visits agreed. The end came quickly, peacefully. So now its back to the pet-loss writing workshop, which our local veterinarian offers. Telling the stories is good therapy. We recommend it. This was Chapter One.