Home Short Takes The Message Worth Repeating: Leave No Pet Behind in a Disaster
Print
Email
Facebook
Twitter 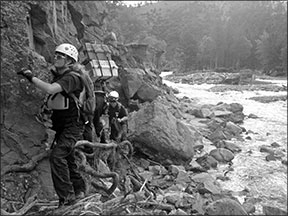 At one point when rushing rivers flooded Colorado towns and farms earlier this year, 2,000 stranded people and 500 pets were evacuated by helicopter. The swift, rising water caused loss of life and damage to 2,380 acres in the state. The American Humane Association and other organizations on the ground rescued hundreds of pets and livestock.

“Floods are among the most terrifying and destructive of natural disasters,” says Robin Ganzert, Ph.D., President and CEO of the association, which is devoted to protecting children and animals. It offers these lifesaving tips in the event a flood is forecast:

Microchip pets or put a tag on their collars with your name, address and cell phone number. (Some experts advise doing both.) Gather their vaccination papers and photos of them in case you become separated and need to identify them if they’re rescued and taken to a shelter.

Have an emergency kit ready and evacuate as early as possible with pet food, medications, water, leashes and cat carriers. Stock extra pet supplies in your car.

Plan routes to higher elevations and a safe destination. Avoid routes near bridges. At least 50 were destroyed or damaged in Colorado. Plan a safe walking route, too.

Don’t leave pets home alone. Disasters can change quickly, and you may not be able to return.
After a flood, be cautious walking on higher ground. Snakes, insects and other animals may have found refuge there. Give your cats time to re-orient. Familiar scents may be altered and cause confusion.

For more information, please refer to “When a Sudden Disaster Strikes” in the July 2013 issue of CatWatch.

Fearless Mice?
It’s well known that exposure to the the parasite Toxoxplasma, which is spread through cat feces, can cause spontaneous abortion in pregnant women and pose a health threat to immune-compromised people.
Now, University of California, Berkeley graduate student Wendy Ingram has uncovered a new development: Mice infected with Toxoplasma lose their fear of cats, and the parasite’s effect seems to be long lasting.

“The fearless behavior in mice persists long after the mouse recovers from the flu-like symptoms of toxoplasmosis and for months after the parasitic infection is cleared from the body,” according to research published in the journal PLoS ONE.

“Even when the parasite is cleared and it’s no longer in the brains of the animals, some kind of … long-term behavior change has occurred,” Ingram says.

Researchers haven’t identified the mechanism responsible for the change, but Ingram speculates that the parasite could damage the smell center of the brain so that the odor of cat urine can’t be detected. The parasite could also alter neurons involved in memory and learning.

While earlier studies showed mice lose their fear of bobcat urine for several weeks after infection, Ingram has found that the three most common strains of Toxoplasma gondii make mice less fearful of cats for at least four months. ❖