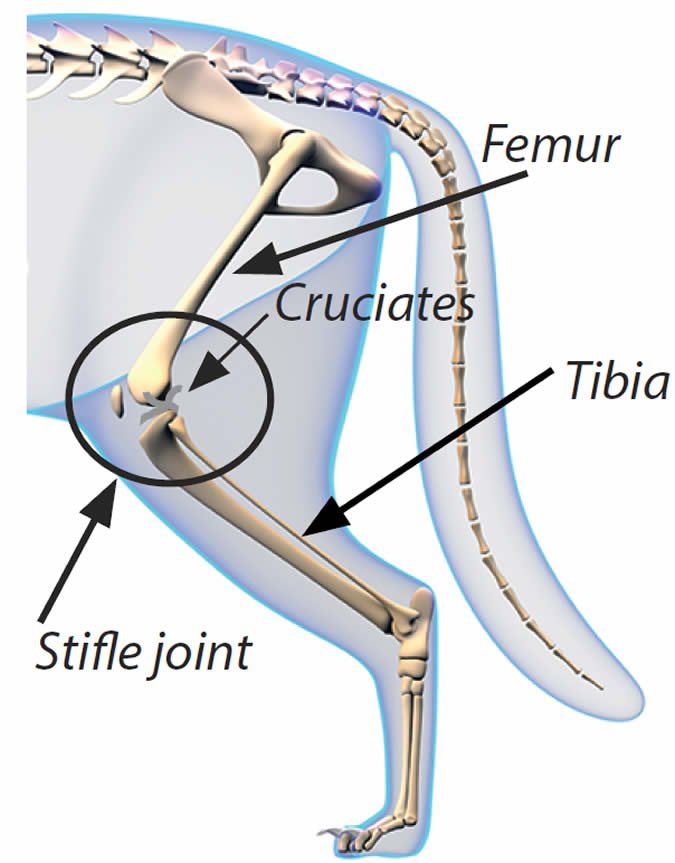 The cranial cruciate ligament helps to stabilize the knee (stifle) in cats. Cats who tear their cruciate ligaments usually will be acutely lame. Upon veterinary examination, a “drawer sign” (abnormal laxity of the stifle) will be evident, suggesting instability of the joint.

In dogs, especially large dogs, surgery is generally recommended to restore the pet to soundness. Surgical techniques vary, from dramatic tibial plateau leveling osteotomy (TPLO) to the less invasive lateral suture technique, to stabilize the joint. Smaller dogs are often treated with a lateral suture repair or conservative management. Cats are smaller than most dogs that rupture their cruciate ligaments, and they can also be amazing in their ability to get around despite orthopedic injuries.

In a retrospective study done at two university hospitals in Sweden and reported in the March 2019 Journal of Feline Medicine and Surgery, 60 cats with cruciate injuries were identified. Of these cats, 50 had follow-up to evaluate how their therapy worked. Conservative treatment was pursued in 28 cats, while 22 had a surgical lateral suture technique.

Cats with surgical correction tended to score higher (more painful) on the pain assessments, even long-term, than cats who only had conservative care. (The Feline Musculoskeletal Pain Index was used for pain evaluations.) In addition, more cats who had surgery ended up rupturing the cruciate ligament on the other rear leg (common in dogs who have surgery).

This study strongly suggests that cats with cruciate injuries might be best served by conservative treatment. Conservative therapy may include crate rest, use of a brace, and rehabilitation exercises. This requires owner dedication and willingness to provide supportive care, but in the long run, the prognosis appears to be better with this approach, in most cases.