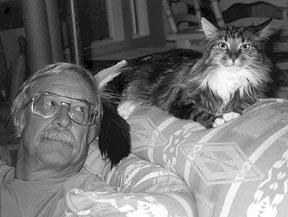 Anthropomorphism is attributing human-style emotions and thoughts to animals and objects, and pet owners are frequently accused of committing this as though it were a sin. Much of mainstream science still holds the view that animals are not able to feel love, anger, joy, shame, fear or jealousy; or that they are capable of conscious thoughts and the ability to make decisions. However, new studies are proving what many pet owners have believed for some time – that our cats and dogs make decisions every day, and that they are quite capable of feeling emotions like anger and jealousy.

Science Branches Out
A new branch of science has developed to examine the emotive and cognitive abilities of animals. The branch of science is called cognitive ethology, and it involves looking at the thoughts and feelings of the animals and pondering questions of why they are conscious. Note I said, why are they conscious, not if they are conscious, says professor Marc Bekoff, PhD, of the University of Colorados Department of Biology and author of Minding Animals.

I think that people are now realizing that all animals, cats, dogs, fish and chimpanzees have individual personalities and they have very rich emotional lives. The reason we are so attracted to cats and dogs is because they are emotional, and they can share their feelings with us, continues Dr. Bekoff.

The Ability to Choose
One of the indicators of an animals ability to think and demonstrate their consciousness is their ability to make choices between alternatives. In their forthcoming book Cat Culture: The Social World of a Cat Shelter, sociology professors Janet and Steve Alger, PhDs, of Siena College and the College of St. Rose in New York respectively, conducted an in-depth study of cats at a shelter.

One criteria of consciousness is an animals ability to make choices in situations, and cats came up very high on their ability to make choices. In the shelter they made many choices, about what foods they liked, what foods they didnt like, how they wanted to sleep together in different places, to be friends with some cats and not others. These are all choices that suggest a sense of self in cats, says Dr. Janet Alger.

The Many Meanings of Meow
Cognitive ethologists recognize that communication is one of the essential determinants of an animals ability to think, feel and have consciousness. Cornell doctoral student Nicholas Nicastro researched cats different meows as a method of communication for his doctoral dissertation in psychology.

I recorded hundreds of cat meows in situations between cats and their owners. Then I took those recordings and went into the lab and had people – not the owners, but unfamiliar listeners – listen to the calls and give me their impressions of them, says Nicastro.

He found there are different types of meows people can identify that seem to have different general meanings. I found certain acoustical qualities that correlate with something sounding pleasant or urgent, and I speculate that the cats can use these acoustical changes to manage our impressions of how their meows sound to get what they want out of their human caretakers, continues Nicastro.

Body Language is Foremost
Most of a cats ability to communicate comes from non-vocal gestures. This form of communication is another example of cats ability to think and evidence of their being conscious. Professors Janet and Steve Alger conducted a study published in the academic journal Society and Animals (Vol. 5 No. 1), Beyond Mead: Symbolic Interaction between Humans and Felines. The Algers studied 20 cat owners and their cats looking for evidence of symbolic interaction between the two.

The Power of Shared Meaning
Symbolic interaction focuses on the ability to communicate through symbols and the development of shared meanings, said Dr. Janet Alger. What our research results has shown is that both between humans and cats, and between cats themselves, shared meaning can develop. This allows them to do all the things that are associated with symbolic interaction, such as taking on the role of other people or other animals and develop a sense of self, and understand things from the others perspective, proposes Dr. Steven Alger.

An example is the case of an owner who stood on a certain rug in her house as a way to communicate to her cat it was time to play, and the cat would then come over and expect to play. There was nothing inherent about the rug that meant play. However, the owner and her cat had developed a shared meaning through the rug (the symbol) that when the owner went over to this rug it communicated to the cat it was play time (the interaction), a shared meaning between the two.

How is all this new information changing the way we view and treat cats in society? According to Dr. Janet Alger, There is no doubt that cats have the ability to think and feel. They feel a lot, and they show those feelings.