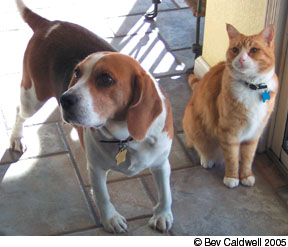 Chester, a senior, orange-and-white polydactyl cat who lives with Pamela Perry, DVM, was only six weeks old when he met his first dog, a 50-pound collie mix named Earl. The two quickly became best friends. Thanks to Earl, Chester has never been afraid of dogs during his long life (hes nearly 18 years old), but wisely gives them plenty of room – or keeps a safe distance – if he doesnt know them well.

Cats and dogs are very different creatures, but they arent natural enemies. Most cats and dogs learn to tolerate each other, says Dr. Perry, a board-certified animal behaviorist at the Cornell University Hospital for Animals. Some turn into great buddies, but dont expect this every time you introduce a new pet, she advises. Some dogs and cats will never get along and should always be separated. Its important to realize this before trying to adopt one or the other into the home.

Because cats are individuals, with varying temperaments and experiences, they may exhibit different responses when exposed to dogs. Playful, predatory, fearful, and indifferent behaviors are all potential responses, notes ELise Christensen, DVM, a resident in Cornells Animal Behavior Clinic. Every animal has its own personality and the potential to react in any of these ways, she says.

Whatever your cats reaction to a newcomer may be, proper planning and preparation can help create and maintain a positive feline/canine relationship. To pave the way for a smooth first meeting, here is what you should know before introducing your cat to a dog.

Most often I see this situation as, Here, Kitty; Puppy is really nice, see? [as the cat is shoved in the puppys face]. Oops! Thats too fast, she says. Active involvement from the owner is ideal; however, it should be done in a gradual, controlled manner. Its also important for humans to behave consistently around animals in their homes, especially during such a stressful time, she adds.

Every pair of animals will move at their own pace depending on their natural inclinations and the human familys response to the situation, she continues. The process can take weeks to months, and in some cases it may never be a good idea to leave the animals alone together without strict supervision.

In addition, if changes have recently occurred in the environment or if your cat appears anxious, stressed or aggressive in general, consult a veterinary behaviorist before adding a dog to the household, she recommends.

If possible, start young. Age can make a difference. Exposing a cat to friendly dogs as a kitten (even before seven weeks) can help a cat recognize dogs as familiars, Dr. Christensen says.

When I first adopted Nellie and her litter of kittens nearly seven years ago, I had three dogs, Dr. Perry recalls. Two of them slept in crates at night. During this time, I would let the kittens out of my bedroom where they first lived. They would approach the dogs in the crates and investigate them. It allowed the kittens to be safe and gave them time to satisfy their curiosity. It also allowed the dogs to calmly meet the kittens without being able to chase them. To this day, none of the cats is afraid of dogs – they act very confidently around them, she says.

Plan ahead. If you know that youll be bringing a new dog home to your resident cat, be sure to assess the dog before adoption for aggression to cats. If the dog has no history of problems and has passed a test for this, get ready to bring her home, Dr. Christensen says.

Before introducing a dog to your feline family member, consider the following tips.

(1) Provide abundant vertical space onto which your cat can jump up and away, along with plenty of places to hide.

(2) Find a new, safe place to put food and water bowls, and ensure that your cat wont be ambushed in or on the way to the litter box.

(3) Gently rub a dry wash cloth on your dog and cat (back and forth between the two) to help develop a group scent.

(4) Use a pheromone diffuser to help decrease pet anxiety.

(5) Leashes (for dogs and cats) can add a measure of control, especially when introductions begin.

(6) Teach your dog that the sit or down command is appropriate behavior around your cat.

Give them space. Demilitarized zones are a good idea, especially if the animals are uncertain or unfriendly to each other, Dr. Christensen says. Keep your dog in a separate room for at least 24 to 48 hours (with human contact and attention, of course), so that your cat can get used to the canine sounds, she suggests. Then you can set up a barrier – like a canine crate or baby gate – to keep your dog in one area. This allows the cat to see the dog without being approached too suddenly. It also allows you to decide whether youll need professional help with your introduction.

Reward appropriate behavior from both animals with small, tasty food bits. If either animal reacts in a fearful or aggressive manner, discontinue treats until the behavior stops, she advises. Its a good idea to introduce dogs and cats for supervised, short periods of time, Dr. Perry says. If either animal is terrified, back off the introductions and separate the animals until both are comfortable in their own living quarters.

Reinforce positive behavior rather than punishing an offender for inappropriate behavior, Dr. Perry stresses. If your dog and cat can co-exist in the same room, offer them praise and/or treats. For instance, if you hold your cat while the dog approaches, give your dog a command to sit or lie down. Reward him for his good behavior. Heed warning signs. Any breed of dog has the potential to be aggressive or excitable around cats. A dog that displays predatory behavior toward small animals, like squirrels, may also show it toward a cat, Dr. Perry cautions. On the other hand, some cats are very aggressive toward dogs and shouldnt be allowed unsupervised contact with them, she says.

Predatory aggression is a difficult behavior to curb – its best to avoid the confrontation and keep the animals completely apart, she continues. Ignoring this situation for only a few minutes can result in tragedy.

Relax, release tension. If you are not calm, you cannot expect your pets to be calm, Dr. Christensen says. Screaming or punishing them during an introduction can have the opposite affect of what you intend, such as increasing pet anxiety and aggression while decreasing the potential to learn in a positive way.

Though it usually takes time, most cats and dogs learn to get along well or to simply ignore each other. The most important thing to remember is to be well-prepared, and dont expose your animals in a way that may be potentially dangerous, Dr. Christensen says.

Keep all interactions as positive as possible, Dr. Perry recommends. Reward good behavior and separate your cat and dog if things arent going well. Above all, be patient! she concludes.