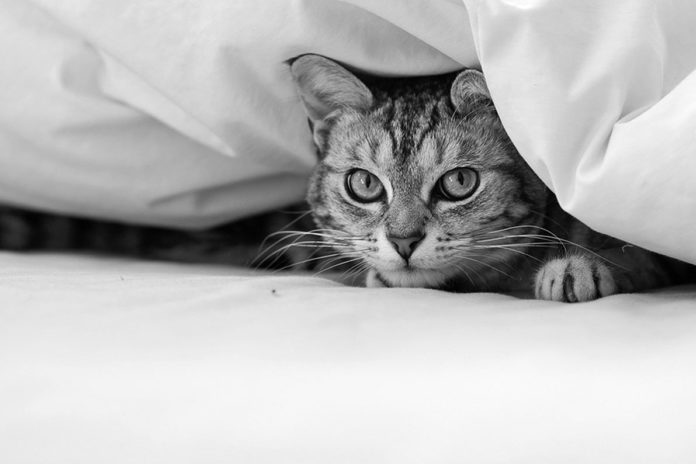 Cats have a reputation for being fearless and lethal predators, but there’s a flip side to this characterization: While domestic cats who live with us still retain their hunting skills, they themselves are also prey — to dogs, urban coyotes, even birds such as hawks and owls.

Cats, then, have a well-developed sense of fear. They are often cautious in the presence of strangers, loud or unexpected noises startle them, and they dislike changes in their environment and daily routine.

Escaping the Noise. “Vacuum cleaners are certainly things they fear,” says behaviorist Katherine A. Houpt, VMD, Ph.D., emeritus professor at Cornell University College of Veterinary Medicine. “When I turned on the vacuum to clean all the fur Hadley the Ragdoll had left on my rug, she

had disappeared out her cat door into 20-degree weather rather than endure the noise of the vacuum.”

Cats are sensitive to changes in their environment, so strange people of any kind can bother them. “Many are afraid of dogs. They are often afraid of their cat carriers because that means something frightening is going to happen, such as being stuck on a plane or going to the vet,” Dr. Houpt says.

Fear vs. Phobia. A fear is not exactly the same as a phobia. Startling at a loud noise, for instance, and then recovering quickly is a normal response to fear. When that normal response becomes consistently exaggerated, fear develops into phobia.

A phobia is a type of anxiety disorder. It may be caused by changes in levels of neurotransmitters such as serotonin in the brain. Serotonin affects many different aspects of mind and body, including mood, memory and learning, certain social behaviors, and cardiovascular, endocrine and muscle function.

It’s no surprise to anyone who has lived with a cat that the primary fears involve any kind of loud noise such as a vacuum cleaner; the presence of large, loud or aggressive dogs, and anything new or different.

Fears of loud or unexpected noises are triggered by what’s called the orienting response. That’s the brain’s mechanism for awareness. When cats or humans hear certain sounds, the brain instantly processes them to determine if they signal danger.

Suffering Anxiety. Cats can also suffer separation anxiety, although it’s not as common as it is in dogs. Or at least owners don’t notice it as much. “Usually in cats they seem to have separation anxiety only when you’re gone overnight as opposed to during the day,” Dr. Houpt says. “Some cats will not use their kitty litter. Some cats just act nervous. Some will have diarrhea when their caretaker is not there. Many cats who have a bladder problem such as idiopathic [of unknown cause] cystitis will be much worse if anything in their environment changes or even if their schedule has changed.”

Cats with separation anxiety can resort to destructive or annoying acts. They may urinate on bedding or clothing, yowl mournfully in their owner’s absence or shred a newly reupholstered sofa. Other signs of separation anxiety include depression, sulking, aggression toward other pets in the home, refusing to eat or chewing at themselves until they leave bald spots.

Their destructive behavior isn’t caused by spite. It’s a cat’s way of calming himself. That’s because your belongings carry your scent. When your cat sprays urine on them, he’s adding his scent to yours, giving him a sense of security. Sort of a back-handed compliment.

Separation anxiety, especially the destructive form, may develop in cats who were orphaned as kittens or weaned too early. Older cats can become phobic about being left alone after a divorce or death in the family. They may pace and cry.

Stay Away! While some cats are phobic about being left alone, others want nothing to do with meeting strangers, whether human, canine or feline. Cats with anthropophobia (fear of people), haphephobia (fear of being touched) or cynophobia (fear of dogs) are the ones who run and hide when faced with their phobia.

Fear of strangers isn’t uncommon, Dr. Houpt says. Guests don’t smell familiar. When they walk in the door, it’s the cue for a cat to run and hide. Some cats refuse to eat.

That fear is often embedded in a cat’s genes, inherited from the male who sired him. A 1992 study by Dr. Houpt and other researchers found that kittens in cat colonies who were friendly toward humans were identified disproportionately as offspring of one of two fathers.

Novel objects can also be the source of a cat’s phobia. Phobias can seem humorous at first glance. Remember the “cats scared by cucumbers” videos that went viral? When unexpectedly presented with a cucumber, cats tended to run, jump or otherwise startle in response to them.

Novel Objects. “The cats in the videos may be reacting to the sudden appearance of a novel object,” says behaviorist and lecturer Pamela Perry, DVM, Ph.D. , in the Cornell Feline Health Center’s article on “Cats and Cucumbers” at www.vet.cornell.edu/FHC. “It might be the fearful ones who are most likely to react to the appearance of a strange object behind them that was not there a minute earlier.”

Scaring a cat by showing him a cucumber may seem like harmless fun, but Dr. Perry warns that it can have lasting effects. Fear is stressful to both mind and body. Worse, a cat who is already fearful can come to associate the scary object — a cucumber, in this case — with surrounding items such as the food bowl or even the area where the fright occurred.

That can be a problem if a phobia causes a cat to be reluctant to eat from his food dish or refuse to enter the kitchen where he is fed. He may even associate a nearby family member with the frightening event, causing him to avoid or display active fear of that person.

Worse, a phobic cat can do a lot of damage. Dr. Houpt recalls one client whose daughter begged for a talking doll for Christmas. When activated, it would say, “Hello, my name is Jenny.”

“The doll started to talk and the cat ran right up to the child and scratched her,” Dr. Houpt says. “They lent me the doll, and I played it to various cats. It really upset cats. I had two cats who climbed up the screen of a porch they were trying so hard to escape.”

Their Response. Fortunately, cats don’t typically do physical damage to humans or objects when they encounter something they fear. The more common response is to run and hide. Dr. Houpt says that’s why cat owners typically don’t complain to her about a cat’s fears. The exception is when the cat is afraid of the owner.

Managing or treating feline phobias usually calls for one or more different techniques. They may include medication, environmental enrichment, behavior modification, playtime and pheromone sprays or diffusers that mimic natural feline facial pheromones. Cats with separation anxiety or changes to their life such as a move to a new home, a new baby or houseguests may respond favorably to the techniques.

Environmental enrichment often involves providing puzzle toys that contain food or giving a cat a window seat or tall cat tree so he has a room with a view. Scheduling meals and play at the same time every day can also help encourage a cat’s sense of security.

Desensitizing your cat to clues that you are preparing to leave home—getting dressed, packing a suitcase or picking up your keys for instance—is a common form of behavior modification. Another is presenting your cat with a treat or toy, then leaving the house while he is distracted.

If you are traveling, try to separate the clues that you’re going away from your actual departure. For instance, pack early and put your suitcase in the car early, as much as a couple of days beforehand. Ask the pet sitter to stick as closely as possible to the cat’s normal schedule for meals and playtime.

Cats need time to adjust to new situations and people. Short repetitions or periods of exposure over a long period of time may help them become accustomed to a person, situation, object or other animal. The operative words here are “long period of time.” Never try to rush things.

If your cat’s phobias are beyond help with these methods, consult a board-certified veterinary behaviorist. He or she may offer insights based on educated observations or prescribe anti-anxiety medication that can help your cat feel calm. Medication alone is ineffective, but it can give the other techniques time to work.

Every cat reacts differently to fear, but some reactions are universal. Your cat is afraid, perhaps intensely, when he displays the following behaviors: