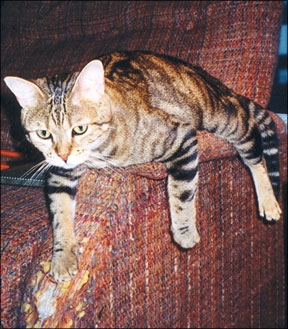 In general, your cat is a delightful companion and a perfectly well-behaved member of your household. However, theres one frustrating exception – his annoying habit of sharpening his claws by scratching away relentlessly on the sides of your furniture. Youve tried to break this habit by shouting at him whenever you catch him in the act. But every time you turn your back, hes at it again.

In desperation, youve considered a permanent solution. You could

simply take the animal to your veterinarian for an onychectomy procedure, in which its claws would be removed. That would surely put a stop to the problem. The cat might continue to go through the motions of scratching away at your sofa or the legs of your piano – but the activity would leave no telltale marks on either your furniture or your attitude toward the cat.

Declawing, however, should be avoided, states Katherine Houpt, VMD, PhD, Cornells James Law Professor of Animal Behavior and director of the animal behavior clinic at the Cornell University Hospital for Animals. “I would recommend declawing only if the owners are so frustrated with the scratching that they are considering euthanizing the animal or abandoning it to a shelter,” she says. “There are several other ways to deal with this problem. Declawing should be regarded only as the last resort.”

Cats normally have four claws on each paw, plus a smaller, elevated claw – a so-called dewclaw – on each of their front paws. The claws are structurally comparable to human fingernails and toenails. However, they differ significantly from human nails and, for that matter, from those of all other carnivores, in that a cat can extend and retract them at will. In their retracted position, the claws are enclosed within the skin of the paws, held there by tough elastic bands of tissue (dorsal ligaments). To expose its crescent-shaped, dagger-sharp little claws for use, a cat must employ a muscle called the deep digital flexor, which is strong enough to overpower the resistance of the dorsal ligaments elasticity. When this muscle is relaxed, the claws immediately retract within the paw.

Feline claws serve several purposes. They are indispensable to a cat, for example, in climbing up tree trunks and maintaining a grip on a slender branch. They allow a cat to seize and hang onto prey. They are also used to mark a cats presence in an area; when scratching at a tree trunk or a patch of turf, a cats paws secrete substances called pheromones, whose odor is detectable to other felines.

Scratching behavior is normal for a cat. It serves to scrape away outer layers of the claws to keep them sharp; it enables a cat to exercise the extending and retracting muscles and ligaments in its paws; and it strengthens an animals legs and shoulders. Because it is an innate behavior, scratching is difficult to stop or even curb. It is like trying to stop a cat from grooming or from burying its waste.

While there is little if anything that an owner can – or really should – do to discourage this behavior, Dr. Houpt points out several measures that can be taken to minimize the unpleasant impact on the household furniture. She advises, for example:

Additionally, pet stores carry inexpensive cardboard scratching pads that come in horizontal and slanted varieties. These seem to appeal to most cats, and are easy to replace when they get worn out.

She notes a few additional approaches: “You can build a booby trap near a piece of precious furniture so that, when a cat stretches up to scratch it, a bunch of empty soda cans falls on its head. Or you can use a device that has a photoelectric motion detector in it. When the cat breaks the beam, the device hisses and releases a scary burst of compressed air. However, the problem with these devices is that any self-respecting cat will simply try to find another place or piece of furniture where it can do its scratching.”

Its pointless to scold the cat or punish it in any way, she adds. “The cat will continue to do its scratching,” she says. “But it will do it when youre not in the room.”