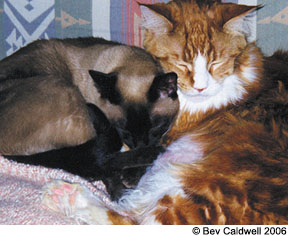 Since one of your beloved cats died several weeks ago, youve been feeling pretty down. People who have been through the same experience tell you this is normal after such a loss.

But then you notice that your other cat is eating a lot less, doesnt play like he used to and wanders around the house, yowling, as if he was looking for his lost companion. Do cats grieve like we do? And if so, how can we help them?

The Lives of Our Cats
Its only within the last ten years or so that scientists have begun to recognize that animals lead rich emotional lives. There is evidence that cats and other animals experience emotional responses to significant changes in their environment – and this includes going through the grieving process after the loss of feline or human companions.

What is important for people to realize, says Emily Levine, DVM, animal behavior resident at Cornell Universitys College of Veterinary Medicine, is that the same brain neurochemistry that allows humans to feel is the same neurochemistry that many animals have – including cats. Cats can mourn.

Signs of Grief
We once thought that all cats could be happy as loners, and many apparently are. But experts now believe that animals derive benefit from the companionship of other cats, just as humans need each other. The bond between cats or other animals – and humans – can be intense. When this bond is broken through death or separation, the surviving cat may go through a real grieving process.

Cats may act differently during grief just as humans do because it is an individual process. But there are some common behaviors. These include loss of regular appetite (even to the point of fasting); changes in sleep patterns; lack of play; excessive howling or becoming very silent; staring out the window for periods of time; and even wandering aimlessly around favorite spots of the deceased companion. Your cat may cling to you or may prefer to be alone.

In 1996, the American Society for the Prevention of Cruelty to Animals (ASPCA) conducted the Companion Animal Mourning Project, during which researchers surveyed the caregivers of 165 pets. According to the survey participants, 65 percent of the pets exhibited four or more of the above behavioral changes following the loss of their companion. Some respondents, according to the ASPCA, found that their grieving cats slept a lot more than usual.

But there are some surprises. If the relationship between the cats was strained, some cats may appear happier when the other is gone. If the second cat is happier after the passing away of the other cat, then I would be less likely to introduce another cat companion, says Levine.

According to Levine, mother cats may grieve for their kittens if the kittens meet an untimely death, or if they are taken away very early (usually less than six weeks after birth). The best thing to prevent a mother cat from grieving is to let her wean her kittens naturally, if possible.

The grieving process usually resolves itself in one to six months. However, if your cat is losing weight from not eating, or engaging in grieving behaviors that seem extreme or prolonged, take her to the veterinarian to make sure that a physical problem is not causing any of the behavioral changes. Here are some steps you can take to ease this time of transition:

Keep the rest of your cats life as stable as you can. Feed and groom her at accustomed times. Try to be around as much as you can so your cat will know that you are available. Play with her.

Encourage your cat to eat. Dont abruptly switch his brand of cat food because this could lead to digestion problems. If you need to entice him, try adding a little liquid from a can of water-packed tuna to his meal.

If a cat has lost a human companion, and assuming that there is another human to take care of the cat, it may help to leave something with the former companions scent on it for the cat to smell, says Levine. The same applies for keeping an item thats been used by a now-missing or deceased animal companion.

If the cat develops some annoying behaviors – such as extra howling or aggression – you shouldnt scold the cat, says Levine. One must approach these cats with the utmost concern and care, she says.

Provide extra love and attention. Lots of TLC will help both you and your cat. Just spend some additional time (if your cat allows) stroking or grooming him. If your cat seems in the mood, play with him. All these activities will help him come to terms with the loss of his companion.

When to Start Anew
You may be tempted to get another cat right away, but its usually best not to rush into things. Wait until your cats signs of grief resolve and she has regained her former energy. And you should also wait until your own grief has subsided. When the whole family – humans and cats – seems emotionally ready, then its time to introduce a new feline member to the household.

One study has shown that there are fewer problems when introducing a female cat, says Levine. If you are going to try to introduce a new companion, make sure that the cats are introduced very gradually to each other, and that their first meetings are always associated with positive events – feeding, attention, play.