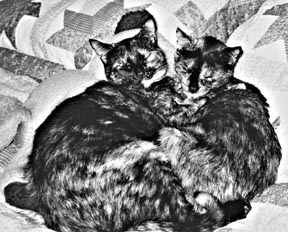 The old adage, Theres only one chance to make a first impression, applies when introducing adult cats to one another. Cats dont like change and need ample time to adjust; introduced incorrectly or rushed, they may never get along. Its important to do it right the first time, says Tracy Kroll, DVM, a former behavior resident at the Cornell University Hospital for Animals. You dont want to un-teach bad behaviors. Youre excited with your new cat, but maybe your resident cat isnt.

Preparation Is Important
Prepare a separate room where your new cat can spend solitary, safe time with his own bed, litter box, food and water bowls, scratching post, and toys. This safe room allows him to settle in and get accustomed to new sounds and smells. Rub a towel over your first cat, then rub it over the new cat, and rub it back and forth a few times to accustom each to the others scent. They can get used to each other before actually meeting; this helps build curious anticipation. When your new kitty seems comfortable and interested in whats beyond his room, open the door and allow him to wander around the house while the resident cat is locked in another room or in a carrier, then switch – with the new cat back in the safe zone, and the resident cat roaming the house.

Face to Face
Set yourself up to succeed, advises Kroll, who received her DVM degree from Cornell in 1997. Have an area where the cats are separated but can eat treats together, for instance on opposite sides of a door slightly cracked-open but secured so as not to open. This gives them a chance to see each other and play footsies without much contact. Repeat this over several days. If they appear curious, are not hissing, and seem ready to meet, keep one in a carrier and let the other approach. Then feed them – one in the carrier, one out. Give the special, tasty stuff – real treats, adds Kroll. When they seem ready, open the carrier; feed more treats and play with them with interactive toys.

Give each cat ample cuddles; extra attention for your first cat will reassure him of his still-special place in the house. Make sure the new cat doesnt steal from the established cats food bowl; have plenty of scratching areas and perches; be sure to have enough litter boxes around the house – one for each cat plus an extra, Kroll says. Reduce competition and make it as easy as you can for them. Wait several weeks before leaving them unsupervised. Separate them when you are not home until you are sure they are getting along well.

When Problems Occur
If a serious fight ensues, toss a blanket over them or spritz them with water to disengage them. Try putting them together again several hours later. If your cat stays anxious because of a new cat in the home, talk to your veterinarian about whether or not a medication like Clomicalm is indicated, suggests Kroll. Also, giving the resident cat time out may help; keep him in a separate room for several hours daily so he can relax and not be on guard every minute. If the cats truly arent getting along, its kinder to both cats to not force them, she says.

Know When Enough Is Enough
Some cats are never going to get along. Thats an important concept. You have to know when to cry uncle. Its not fair to the humans or the cats in the house to live with that kind of stress, adds Kroll. If two cats are not getting along after a prolonged period, the chances of them suddenly deciding they like one another are very low, she says. You cant force friendship on cats.