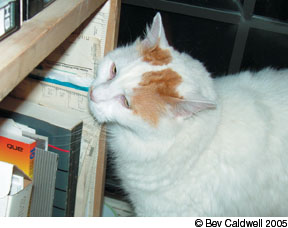 Cats, like people, need their space. That is the main reason your cat engages in an activity called marking.

Marking can take many forms, however, some of them endearing and some of them maddening to the cat owner. Cats may mark by brushing a person or an object in the household with their cheeks or the top of their tails – both contain scent glands.

But they may also mark by scratching or by spraying their urine. Whether squatting to urinate is a form of marking or not is controversial, however, says Dr. Houpt.

Bunting, or rubbing with the cheeks, seems to be a more friendly gesture, of course, than urine spray, says Dr. Houpt. Bunting says, Youre mine and I like you, while spraying declares: This is my place.

Cats usually choose to scratch prominent objects – usually vertical objects – such as the corner of the sofa or a kitchen cabinet. If you find your cat industriously scratching your rugs, he could simply be sharpening his claws. Or he could be marking the surface with scents from glands in his paw pads.

Although marking is meant to establish a cats territory, it is not necessarily done at the territorial boundaries, but where the cat is most active. Cats in a forest mark trees along their common route, says Dr. Houpt.

Cats tend to spray when they are having social disputes with other cats. Anxious cats are likely to spray because they detect the odor of another cat. That smells like Fluffy or Felix; Ive got to spray over it, is how the cat may think, explains Dr. Houpt.

Occasionally, a cat will even spray after seeing a stray cat through the window.

There are several ways to cope with unwanted marking activity. The more cats in the household, the greater the likelihood of spraying. A one-cat household usually has fewer problems. If you cant reduce the number of cats, you can separate them and give each his own area. If that is impractical, try to change the cats motivation for spraying.

Punishment is not a good idea. All you do is teach the cat to be sneaky about spraying, warns Dr. Houpt. Various pharmaceuticals have been tried with some success, but Dr. Houpt says they seem to work only temporarily. A spray remedy, Feliway, is a synthetic substance that resembles the odor of cheek-gland secretion. If it is sprayed where the cat usually sprays urine, it may motivate the cat to cheek-mark the area instead.

Scratching can be controlled by providing sturdy scratching posts, or even real logs, in prominent places. Plastic claw covers that glue on like artificial nails have been used to minimize the damage to furniture caused by scratching, with some success.

And if your cat is nasty and has the tendency to bite, dont allow him to rub you with his cheek or tail. Its a privilege that the cat doesnt deserve. Hes not being friendly, explains Dr. Houpt. Hes merely telling you that he owns you.