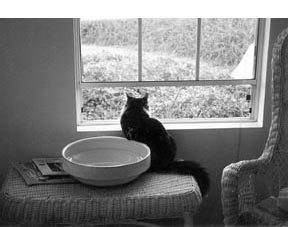 Most of us have heard of separation anxiety in dogs, resulting in varying degrees of agitation at the sight of their primary person preparing to leave the house. Once left alone, these dogs may bark incessantly, or damage property – including doors and windows – in an effort to follow.

Is it possible that cats – those paragons of independent living – can suffer from separation anxiety, too?

According to Emily Levine, DVM, animal behavior resident at the Cornell University Hospital for Animals, Definitely, yes. They can certainly suffer from Separation Anxiety Syndrome (SAS). Some cats miss the presence of their households people when all are gone. Other cats may get anxious away from their animal companions. These second sufferers are rarely reported to veterinarians, though, simply because peoples pets are usually separated only rarely. Most often, an SAS cat becomes anxious when a particular person – known in scientific literature as the sufferers attachment figure – is absent.

It is unknown how common SAS is among felines: It has as yet drawn little research attention. Cats are presented to veterinary clinics with separation anxiety less frequently than dogs because their signs create fewer problems for owners and they often occur out of sight and earshot. (For example, cats can exhibit separation anxiety by hiding when their attachment figure or other companions depart, a sign that few of us would know except through the use of multiple video cameras.)

Cats Are More Social Than We Think
Another reason cats are less often associated with separation anxiety is that they are stereotyped as unsocial. The truth is that most cats are unquestionably social, though not to the degree of humans or dogs. Dr. Levine notes that all cats have social needs, and they can be quite social with people and with certain other cats or other animals.

One example of their subtle sociability is that most housecats prefer to eat in the company of their household companions, waiting for them to enter the room to begin eating. Most cats have one or more companions to whom they become attached and, for some, the absence of these attachment figures leads to anxiety. Dr. Levine believes feline SAS is altogether much more common than generally thought.

Most of the signs of feline separation anxiety are relatively subtle. Some SAS cats vocalize a lot in their distress, meowing or yowling, although not as loudly as do SAS dogs, rarely leading to neighbor complaints. Others promptly hide. A few behave destructively, by ripping clothes or other personal possessions belonging to their attachment figure.

Some SAS cats turn to excessive grooming – considerably more than the approximately 15 percent of their day that is considered normal amounts of grooming – and sometimes to the point of baring a patch of skin. Still others stop eating while alone. Whatever the cats particular anxious behaviors, they heighten and peak after weve left.

Whether due to more frequent occurrence than other signs, or because it is so much more obvious and upsetting, it is house soiling that most frequently alerts owners and diagnosing veterinarians to feline SAS. Soiling most commonly occurs as spraying: urinating onto vertical surfaces such as walls and sides of furniture. Some cats also mark horizontal surfaces, like a bed or a couch, with urine or feces. Many of these select a spot to soil with high social relevance to them, such as bed areas or clothing containing their persons scent.

Others show no preference via scent cues. Carpeting and furniture that have been soiled will need careful cleaning to prevent cats from returning to relieve themselves there. Enzymatic cleaners, such as Natures Miracle or Anti-Icky-Poo, are typically needed to fully degrade residual urine – both for humans noses and to discourage Kitty from making a return engagement to the same spot.

Regardless of which behaviors a particular cat uses to express his anxiety, they must occur only in the absence of their attachment figure to be considered SAS. Otherwise, their distress comes from another problem, such as a bladder inflammation or, if confined, possibly claustrophobia.

How to Help
Solutions for feline SAS – like the solutions for many behavioral problems – involve three approaches: drugs, environmental modification and behavioral modification. Anti-anxiety medication is often useful for toning down the level of anxiety, which then allows other changes to help, especially if the SAS is long-standing.

An SAS episode typically begins when an attachment figure – usually the owner – is preparing to leave home. Kitty watches her for departure signs, such as turning on her answering machine, saying goodbye in that special voice, or picking up keys from the kitchen counter basket. He watches for these behavioral cues and begins to feel anxious.

As a result, a key behavior modification step the owner can take is noticing exactly when the cat begins his anxiety cycle during her departure routing. She needs to watch for signs such as increasing vocalization or studied grooming which begin at the same moment during her preparations to leave each day. She must then identify which of her actions precede these signs (or in behavioral analysis terms. her behavioral cues to him shes going to leave). If the cue is picking up keys from the kitchen counter and pocketing them, she can make a point of randomly moving her keys from the counter to her pocket at varying times of the day – without actually leaving. This begins to de-link her behavioral cues to the feared departure, or desensitize kitty to what starts his cycle of anxiety.

He can then begin to experience his attachment figures leaving without such distressing nervousness. Its also useful to minimize departure rituals: no lengthy conversations and goodbyes with your cat. Just go.

Another Plan: Enrich Your Cats Environment
There are other behavioral strategies that may help, but are difficult for most people to carry out, such as graduated lengths of time away or creatively varying departure routines.

More valuable and practical, though, is an environmental modification of stimulus enrichment. A great many housecats are understimulated, and their pining for us is connected to their lack of interesting activities. Interactive toys provided for our cats when we leave – like the KittyKong or PanicMouse – can engage their minds and give them something useful and enjoyable to do while were gone. Increasing areas for them to climb onto can also be valuable. Dr. Levine points out, We measure our living space in horizontal square footage. For cats, that measure has to include vertical square footage.

Cat trees, cleared space on furniture next to windows offering a view, or kitty ledges can multiply the stimulation a cat gets during a day. Some people have even built long, open shelves along a series of walls for their cat to prowl. One of Dr. Levines favorite cat stimulants is a ping-pong ball left in a bathtub, since the ball will roll around and around when batted. Another option is to engage his hunter instincts by leaving less food in his bowl plus increasingly better-hidden stashes of dry food.

Unfortunately, separation anxiety is not, as we once thought, the exclusive domain of dogs: Many more cats probably suffer SAS than we realize. Its my feeling that there are probably a lot more out there than we now know, but when its expressed mainly through grooming or hiding or private meowing, how often do we know theyre anxious? says Dr. Levine. Knowing that some cats are vulnerable to separation anxiety, we can watch for its mostly quiet signs and prevent its development through daily attention to our kitties activity needs and by enriching their environments while were absent.