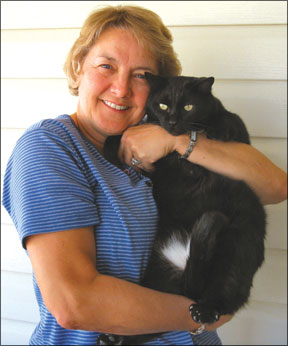 Dear Elizabeth: My cat, Couscous, is 15 years old, and I know that I wont have her here with me forever. I cant imagine life without her dainty little paws brushing against my face in the morning as she wakes me for breakfast, or the warm, happy mews that she greets me with each time I walk in the door. I read about a company that was cloning cats. How does cloning work, and is this something that I could consider to ensure that Couscous will always be with me?

Its a sad fact of life that cats dont live nearly long enough for the humans who love them. While cloning Couscous isnt an option, I would encourage you to take lots of photos and videos of Couscous, so that these images can bring you comfort when shes no longer a part of your physical world. Take them now; dont delay, because you never know what tomorrow will bring. Afterwards, maybe you would like to do something to help other cats, in honor of Couscous.

A donation to an organization aiding cats is a traditional way to honor the memory of a beloved cat (the Cornell Feline Health Center is very grateful for the many memorial gifts it receives).

You could also volunteer with a local shelter or rescue group, socializing cats or taking photos of adoptable pets to put on a Web site or poster. Dropping off supplies at a shelter can make you feel like you have a direct connection to cats in need. Finally, please consider sharing your home and your heart with another cat. For sure, he or she wont be a clone of Couscous, but this unique individual will surely bring joy to your home as you discover exactly what makes him or her so special.

This is not to say there havent been attempts at cloning cats. Scientists at the College of Veterinary Medicine, Texas A&M, with funding from a biotechnology company – Genetics Savings & Clone – produced the worlds first cloned cat. A clone is an exact genetic copy of an individual, getting two sets of chromosomes from that individual, rather than getting one set from one parent and another set from another parent.

The first cloned cat, “CC” (short for Carbon Copy), was born on December 22, 2001. CC was produced by placing the nucleus of a cell from the genetic donor, in this case a female cat named Rainbow, into an egg from which the nucleus had been removed. The resulting embryo was then surgically placed into a surrogate cat, and CC was born. Actually, this is a simple description of a complicated process. Producing CC was quite a feat …188 attempts were made, resulting in 87 cloned embryos that were transferred into eight surrogate mothers. Only two pregnancies resulted, and CC was the only kitten to survive.

Surprisingly, despite having an exact copy of her mothers genes, CC isnt an exact replica of her mother. CC is a sleek, grey tabby and white cat while her genetic mother, Rainbow, has a more robust physique (like me!), and she is calico in color. It turns out that coat color in cats is determined by more than genes. CCs personality also differed from Rainbows, which is less of a surprise since its long been thought that personality and behavior are molded by conditions in the womb and experiences an individual undergoes early in life. New techniques put in use after CCs birth resulted in clones more closely resembling their genetic donors, and improved the safety and efficiency of the cloning procedure, but producing a true carbon copy in both looks and behavior could never be guaranteed.

Genetics Savings and Clones began offering commercially cloned cats to the public in 2004, but shut its doors in 2006. While at least six cloned cats were produced, only two were sold commercially, and the public did not flock to the company for clones of beloved cats, perhaps for several reasons. One of the main stumbling blocks for most people was the cost of obtaining a cloned cat: The Company initially set the price at $50,000, but even when the price was dropped to $32,000, orders didnt follow.

Controversies developed, fueled by animal welfare groups who believed that with millions of cats being euthanized each year, it was unethical to spend so much money to obtain just one cat, when the money could be used instead to help many cats that were fighting for their very lives. Finally, the cloned cats didnt always closely resemble the cats from whom they were cloned, either in looks or personality. At this time, no commercial venues exist to clone pet cats, but several companies will store genetic material from pets, for a fee, in case cloning becomes available. Love, Elizabeth