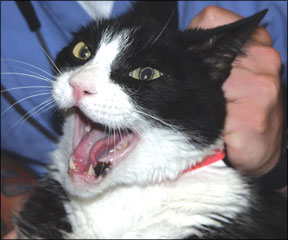 It is safe to say that most people live with their cats without much concern about getting bitten. Alas, cats have been known to try to bite veterinarians and animal handlers. Frightened animals bite. But why do cats sometimes bite the people they live with? At times, the motivation for aggressive behavior is clear. Yet there are also situations where aggression is just plain difficult to understand.

Cats may behave aggressively during procedures such as grooming or nail clipping. A certain degree of restraint is needed to perform these manipulations. Since cats feel trapped when restrained, they may struggle or bite. It may be possible to prevent the development of fear related to handling by conditioning young cats to accept gentle restraint. Early introduction to grooming may be paired with treats.

The cat that has already begun to exhibit aggression in this context can be treated. Procedures must be introduced very gradually. Gentle restraint and brief periods of grooming should be followed by something pleasant. After a few successful short sessions, add a slightly firmer touch, or increase the length of the session, always ending on a positive note. Through this system of desensitization and counterconditioning, the cats fear should subside.

Some cats lunge and bite when people move about the house. If the cat in question is known to be friendly and playful, the behavior may be a form of inappropriate play. Perhaps the cat was taken from her siblings at such an early age that she never learned to regulate the intensity of her bite. Perhaps family members once encouraged the cat – when she was a kitten and the behavior was cute – to leap and grab limbs.

It may be possible to prevent the development of biting during play by using toys rather than body parts when playing with kittens. If aggressive play has already become part of the cats repertoire, the therapeutic plan involves redirecting the cat. Try to anticipate these painful attacks. Be prepared by keeping some ping pong balls or furry mice close at hand. Before moving past the cat in pounce position, toss the toys.

Unlike the playful cat, there are cats that do not appear even one bit friendly as they lunge to bite family members. Cats that stiffen and stare, growl, yowl or become piloerect (“big tail”) before biting are not playing.

Are they hunting? When a cat bites hard in this context, it is tempting to think that they somehow view a human limb as a critter. However, when cats hunt, they are generally silent and they are not piloerect.

Though there may indeed be a component of predatory behavior in these bites, it is probably simplistic to attribute the behavior to hunting. It is possible that there is a neurological abnormality that drives this potentially dangerous behavior.

Can these cats be treated? Yes, to a degree. It is essential that great care is taken to prevent the cat from catching people off guard. Cats that attack moving body parts should not be permitted to sleep in bed with unsuspecting people. They should wear collar bells so that people are aware that the cat is active nearby.

A counterconditioning strategy can be used to reduce the cats arousal and improve safety. Cats may be trained to run to the kitchen at the sound of a whistle. Before moving, signal with a whistle. The trained cat will race to the kitchen for a snack. With food on his mind, she is less likely to behave in an aggressive manner.

Why would a cat curl up in a lap, appear for all intents and purposes calm, and then suddenly bite? In some cases, this may be an assertive behavior. The cat no longer wants to be touched, but does not want to move from its cozy position. Another possibility is that certain cats may actually experience an uncomfortable physical sensation in response to being petted for an extended period.

Fortunately, most cats that bite in this manner do so in an inhibited manner. Some cats, oftentimes those with a history of early separation from their feline family, may bite very hard.

It may be possible to desensitize a cat to being petted for extended periods. The length of the petting session can be increased randomly but very gradually over a period of weeks. It is essential to stop the session before the cat signals that she is about to bite. A safer solution is to consistently limit petting time, and to heed the cats cues that shes had enough.

All aggression in cats should be taken seriously. Many forms are treatable. Even though we cannot always understand cats, we can try to predict behavior, in an effort to improve everyones safety.