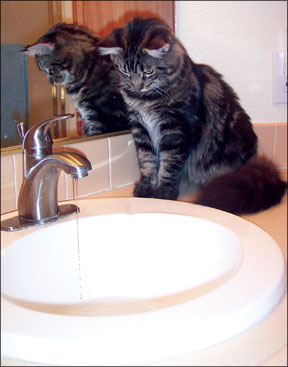 This month I received two letters describing cats that play with water. One of the cats dips her paws into the water bowl until the bowl is empty. The larger the bowl, the larger the puddle on the floor. Actually, that bowl has now been moved to the bathtub. (Still a mess, I am told.)

The second cat brings things to his dish. The owner has found articles of clothing, paper and even birthday candles in her cats water bowl. He opens drawers to gain access to these items. Most recently, a couch cushion was discovered on its way to the dish.

Such ambitious cats! Undoubtedly, they must be fun to watch for a while. But it gets expensive to replace new furniture and flooring. And it can be dangerous for the cat – a large item might be inadvertently swallowed, causing an obstruction. Or a water-soluble toxin might be released into the water and ingested.

Why do these behaviors occur and what can we do about them? Frankly, we dont really know. (However, experts can speculate!) Remember, cats are hunters, hard-wired to go to great lengths to find prey. The drive to play, get serious and grab is powerful. Cats have preferences about which prey species to pursue. Granted, they dont pursue couches in the woods. But they certainly do fish – and even swim.

House cats often exhibit bits of thwarted behavior sequences. Imagine a cat stalking a small creature, say, a frog. The frog dives into the water and the cat watches intently, then dips in for the catch. Mission accomplished; time for a snooze.

In our living rooms, the mission may not always be accomplished. A cat that is driven to hunt may not know when the game is over. He gets no prey and so he repeats the behavior sequence that is familiar. Reach and dunk. That may explain the repetitive reaching into the dish.

Of course, some cats reach into the dish just to scoop out a serving. These cats may simply detest wet whiskers. And the cat that dips and drinks to excess may actually have a medical problem. A veterinary work-up would be essential to rule out the many diseases that cause increased thirst.

The clever cat in the second household may have accidentally discovered something in his dish. Perhaps a toy fell in. Presto, an interactive toy. The drowning toy needed to be rescued (or captured). How clever to create his own prey by dragging portable items to that dish. Hunt after hunt, no boredom here, but this game can be dangerous and expensive.

Now to the second question: What can be done? Dont simply try to punish your cat – that will surely lead to fear and frustration. Rather, environmental enrichment may be the key. You need to concoct a more exciting hunt. Use your imagination and try to outdo your cat. Hide bits of food in various areas of the house. Treats or interesting toys may be buried inside boxes, tunnels or drawers. And of course, play with your cat regularly. Invent some interesting games of your own. If you are away for long hours, set your television to play your cats favorite shows at various times throughout the day.

Sometimes, a particular behavior sequence occurs so often that it is described as a compulsive behavior. A diagnosis of compulsive behavior would be considered for the cat that engages in the problem behavior at the expense of normal behaviors. The physically healthy water-dunking cat that leaves his food uneaten may be suffering from a compulsive disorder. When your cat remains at his dish rather than greeting you at the door, or when he regularly leaves your lap to engage in water dunking, the behavior has become pathological. Environmental enrichment might not be enough to interrupt this behavior pattern. Behavior modification and even anti-anxiety medication might be needed.

Remember, cats are sensitive to our desires. These water sports may be charming at first. Your cat is surely aware that you find his behavior amusing. Long after you have ceased to see the humor, though, your cat will continue to engage in any behavior that once brought a smile to your face. A behavior can never be eliminated until you really want it to disappear.