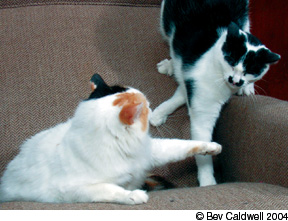 Strike, slash and dash. It may be over in seconds, but a genuine catfight is terrifying to watch. Cats essentially have five weapons: four feet and a mouth, says Pamela Perry, DVM, animal behavior resident at the Animal Behavior Clinic at Cornell Universitys College of Veterinary Medicine. Cats use all of them, they move quickly, and fur will fly whether or not there are any injuries, she says.

Generally, spayed or neutered indoor cats do not fight. Cats can live in close quarters and do very well, Dr. Perry says. The occasional tussle is okay and normal for cats – as long as they show signs of being happy and relaxed, eating normally and behaving socially with everyone else in the household.

Why Cats Fight
While resident cats usually learn to get along, exceptions exist. Within a home, cats can start fighting for several different reasons – such as the addition of a new cat to the family – and not all of these reasons are understood. For example, a common scenario can occur when one cat in a household visits the veterinarian, Dr. Perry says. When the cat comes home, he smells a little different. It may take a day or two before the cat that stayed home will accept the returning cat without hissing and swatting. (See sidebar for other common causes of cat fights in multi-cat households.)

When should you be concerned about your cats behavior? Even if no overt aggression occurs – no actual rough-and-tumble fighting – but one cat is afraid to come into the room when the other cat is there, thats when I worry, because an anxious cats quality of life is reduced, Dr. Perry says. Its not always the actual attack that is the worst part, because emotional intimidation can be traumatic for cats. No one wants to be bullied all the time, she adds.

Aggressive feline behavior includes active, passive and redirected aggression. In addition to using claws and teeth, posturing, staring and threatening are also considered active aggression, even though no contact takes place. Urine spraying around the house is a common form of passive aggression. A typical example of redirected aggression occurs when a stray cat outside picks a fight with a cat behind a window. The cat inside the home then attacks another resident cat nearby.

What causes redirected aggression? Cats get so highly aroused and want to hit that target, Dr. Perry says. Its similar to the way you feel when youve had such a tough day that you just want to punch something. Well, cats do it! And that something happens to be the next closest body, unfortunately. This response gets triggered quickly, and humans can be victims of this behavior, too. I believe the attacking cats dont  realize who they are striking. The cats may be fine in five minutes, or they may take days to get over the experience, she explains.

Some Professional Help
All species need to feel they have control over their environment, she says. Cats need to be able to go where they feel comfortable and safe. To prevent cat fights and help your cats live in harmony, consider the following expert tips.

Rule out medical problems first. Cats occasionally suddenly stop liking each other, and the reason can be difficult to figure out, Dr. Perry notes. She relates the story of two older cats who got along beautifully for years until one suddenly began to terrorize the other. A thorough medical exam revealed that the aggressive cat had a tumor that was causing painful urinary problems.

Go up! Increase the vertical space in your home (for example, cat trees or access to a window perch), to provide welcome safe havens, along with environmental enrichment, for cats.

Provide escape routes. Ensure that your home has plenty of easy access to other rooms to keep a cat from feeling cornered or trapped.

Separate but equal treatment may ensure peace. Cats often establish their own territories at home, especially if they live in a large house. It doesnt mean they wont enter other parts of the home, but their core territory will be in a certain area, Dr. Perry says. I always tell clients to make each part as nice as the other, she says. If one cat has a nice window perch, make sure the other one does, too. Put a litter box and food in each section, and spend time with your cats in each area as well, giving them as much equal attention as possible.

It makes scents. Its a good idea to separate cats who are not getting along. The period of time depends on the individuals, and how aroused and upset both cats appear to be. Give them equal space, or swap their living areas, Dr. Perry recommends. Exchange their scents by rubbing a towel on their cheek glands. Placing a towel with the scent of one cat on your lap while you pet the other cat will help him associate the scent with affection. A plug-in feline facial pheromone diffuser also can help provide a calming atmosphere and reduce stress, she suggests.

When they are ready (as, for instance, when they play a friendly game of paws under the door), try opening the door a little so they can sniff through but cant get to each other. Proceed slowly.

If you can have them in the same room, eating out of their dishes at opposite ends of the room, thats a good sign, Dr. Perry says. Then you can slowly try to get their food dishes closer. [Returning to normal] may happen quickly or take months. Do it very gradually and be patient, she advises.

Finally, contact a veterinarian for help, especially if the problem is severe. Some of these cats do need medication temporarily to reduce the aggression for the aggressor and to reduce fear for the victim, Dr. Perry concludes.