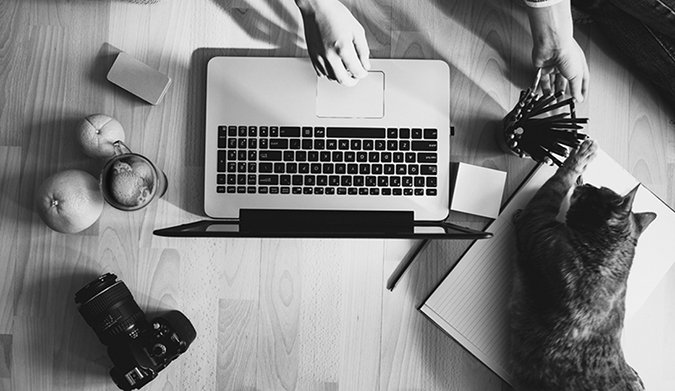 When your cat walks between your legs, paws at your ankles or edges into the space between your neck and the sofa, he has one goal in mind: He wants to get close to you. The behavior can help further your bond — there’s no need to stop it

But when he walks over your keyboard while you’re trying to work or meows nonstop, attention-seeking behavior becomes annoying or even destructive — for example, if you lose work that you hadn’t saved.

“We don’t know the motivation for it,” says Katherine A. Houpt, VMD, Ph.D., professor emeritus at Cornell University College of Veterinary Medicine and a founder of the American College of Veterinary Behaviorists. “Sometimes it is stress, but you can’t blame everything on stress. Many cats demand attention when there’s no stress, but they like to be petted, talked to and played with.”

If a cat discovers that the behavior brings him what he wants, he’ll increase it to get more attention. Common ruses include jumping up to be at your level, knocking objects over, even an inhibited bite. “Meowing is what cats do the most for attention — you can’t ignore it,” Dr. Houpt says. “It doesn’t take many calories to meow, so they can do it for a really long time.”

Irregular litter box cleaning on your part may contribute to attention-seeking. “A good cat will come and tell you to change it, but most cats will just eliminate in a different place like your bed or rug,” Dr. Houpt says.

It doesn’t take long for any behavior to become ingrained. About 20 repetitions of a behavior will teach a cat the consequences of his behavior, Dr. Houpt says. If you want your cat to jump up on the chair with you, and you treat him every time he does, soon he will be jumping up on his own and expecting a treat.

Because your cat has repeated a behavior and you’ve rewarded him intermittently, he has a high ratio of demand to reward. Hope springs eternal, and he will keep trying. “He thinks if three meows don’t get him what he wants, he’ll try 25,” Dr. Houpt says.

The alternatives: You can clicker train a cat to sit on a mat away from you rather than let him continue to paw at you. Environment enrichment can prevent boredom and engage more of his time and energy. Offer more playtime, install cat trees, tunnels and a catio — an enclosed cat patio — so he can safely enjoy the outdoors.

One difficulty in working with a cat entrenched in this behavior is that you can teach him to stop doing something specific to you, like jumping into your chair, but not with other people. In that case, Dr. Houpt says you can counter condition him to sit or do something incompatible with jumping up such as going to a certain place.

In counter conditioning, if the cat is afraid of something, perhaps the sound of the garage door opening, give a treat just as he begins to hear the sound so he can associate the scary sound with something pleasant.

If you dislike a particular behavior, such as pawing, wait until he stops before you pay any attention to him. One important caveat: Punishment doesn’t work well in extinguishing attention getting. If your cat jumps on your lap when you don’t want him to, you might stand up and he falls. He won’t do it again, at least not for an hour or so.

When It’s Not a Bid for Attention

It’s possible that separation anxiety causes a cat’s intense meowing or caterwauling and is not simply a typical bid for attention. True separation anxiety is panic when left alone — panic to the point of destroying objects in the home.

It’s not necessarily due to a traumatic event; some cats are simply predisposed to it. Oriental breeds – Siamese and Tonkinese — may be predisposed. A medical cause is also possible and should be ruled out before heading to the veterinary behaviorist.

Separation anxiety can be treated with or without medication, but medication alone will not be sufficient, says Katherine A. Houpt, VMD, Ph.D., at Cornell. “Medication will work only if you combine it with behavior modification.”

You can find members of the American College of Veterinary Behaviorists by state by clicking here.

Ignoring him works much better than a correction. Negative reinforcement and punishment are not the same thing. Negative reinforcement is when you do something unpleasant like blow at him until your cat does what you want — that is, moves away. His reward is removing the negative enforcement. A correction is when the cat does something you dislike, and as a consequence you do something unpleasant such as yelling at him. Ignoring that behavior by not reacting, getting up and leaving the room without responding, even without looking him in the eye is effective but has to be consistent.

“The only negative thing I have done with my cats is if they jump on my desk, they get groomed with a brush I keep on my desk. It’s a correction that seems to work,” Dr. Houpt says.