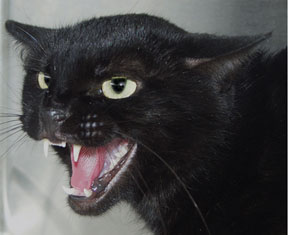 You have a group of people over for dinner. While everyone is relaxing in the living room, in walks the boss of the house: your cat. All of your guests clamor for your cat to come over, except for one, who doesnt make much of a fuss, because he hates cats. So who does your cat check out? The one guest who doesnt welcome his company, of course.

Why does this happen? The answer is eye contact, or rather, the lack of eye contact. Some animal behaviorists conjecture that prolonged eye contact makes cats feel threatened or provoked. When your cat walks into the room, she senses everyones eyes on her. However, there is one person who is not staring at her – the guest who hates cats – so thats why she probably chooses to approach him; she just feels more comfortable with that person.

People who live with cats often boast that they always know what their cat is thinking. But there may still be some surprises for people who share their home with a cat. “Cats make the most facial expressions of all carnivores,” says Stefanie Schwartz, DVM, MSc, director of behavior services at VCA South Shore Animal Hospital in Weymouth, Massachusetts. “Nonverbal communication, like facial expressions, is the hallmark of a social species.”

Cats use every part of their bodies to communicate to humans and to other cats and animals. Experts say that there are more than 25 different visual signals used in numerous combinations, and there are undoubtedly many subtle cues and signals that humans dont recognize, according to Dr. Schwartz, who is board-certified by the American College of Veterinary Behaviorists. Heres a guide to the most common signals your cat gives you.

The Eyes Have It

We humans love to make eye contact with each other. What many of us dont realize is that cats dont enjoy prolonged eye contact with humans or other cats. To them, its threatening. Rival cats will often try to outstare each other when there is a territorial conflict. When the event is over and the cats relax again, they will blink slowly at their rival. They also do this with their human companions. You may have noticed what many people consider as the “cat smile.” Your cat makes this expression when she lowers her lids and appears half asleep, often in response to your smiling or cooing at her. The half-mast eyes are a signal of relaxation. Dilated pupils usually indicate fear – or excitement, such as when you wiggle some enticing toy in front of your cat. But watch out for narrowed pupils; this could mean that your cat is angry, especially when coupled with other signs of anger. When your cat seemingly stares absentmindedly into space, he is still taking in a lot of detail about his environment, because cats have excellent peripheral vision.

Your cat has two cute, furry signal receivers on his head: his ears. If you watch the ears carefully, youll see how they can each swivel around 180 degrees, independently of each other. There are 10 major muscles per ear flap (pinna) that control ear position, and a number of smaller ones that can change the shape of the pinna, all of which enable the ears to scan constantly for noises. Watch your cat when hes almost asleep; his ears still perk up at a sound. Cats also use their ears to communicate. If you scold your cat for something hes done, youll often find him with his ears back (and his body low to the ground), as if he was looking “guilty.” When your cats ears are facing forward and slightly tilted back, your cat is pretty happy. However, make him anxious, and youll see those ears flatten down. Outright fear will make your cats ears move even flatter against his head. Most people recognize “curious” ears: bent forward on a forward-tilted head. When you see this position, you can bet your cat is really focusing on something – like an irresistible spider crawling along the floor.

To really interpret the different positions of your cats head, you also need to look at his posture and tail at the same time. A confident cat generally struts around with his head held high. A favorite greeting that friendly cats share with each other and their human friends is nose-bumping. If you touch noses with your cat, youll notice that he sniffs your face. Hes reaffirming that you are indeed a family member. If given the chance, your cat will do what is called head bunting – rubbing his head on you to mark you with his scent.

What The Mouth Says

Meowing is just one of the ways a cat uses his mouth to communicate. A cat will yawn when hes sleepy, but also when hes relaxed. When angered or threatened, a cat will open his mouth and show his teeth. There is another open-mouthed pose thats called the gape or Flehmen response, which is performed in reaction to smelling another cats urine or when checking out sexual scents, according to Dr. Schwartz. One of the most endearing things a cat can do, say many human buddies, is the “silent meow.” This is a very intimate form of contact, often eliciting a warm, caring response from the person who sees it. The silent meow is usually reserved for a favorite companion.

The Tail of the Cat

A cats tail has a language all its own, and often indicates a lot just by itself. When a cat vigorously wags or lashes her tail back and forth, she may be quite angry. On the other hand, a cat may swish her tail back and forth when she is being playful. A quivering tail means your cat is very happy to see you. Your cat is content if you see her gently wave her tail back and forth. The same action may indicate concentration when your cat is sitting quietly and looking at something. If you observe your cat strolling with her tail held high, you know shes a confident feline, and having a very good day. And you can count yourself lucky if your cat winds her tail around your legs as she rubs up against you. “This is a very sociable gesture,” says Dr. Schwartz. Cats that are very good friends will often intertwine their tails when they greet each other.

By arching his back, your cat shows that hes afraid or is about to become aggressive. This is usually accompanied by your cat fluffing out with his hair all on end, especially on his tail. The arching position is supposed to make your cat appear larger and more formidable to an enemy. Your feline may even turn sideways to make a greater impression on his foe. But if youre his friend instead, he may welcome you by rolling over and lying on his back, exposing his belly. If you find him sleeping belly-up, your cat is paying you the highest compliment he can give a human, because the most vulnerable place on a cat is his belly. So if he gives you access to his belly – to scratch or stroke it – this means he totally trusts you and feels absolutely comfortable near you and in his surroundings.

Both cats and dogs rely a lot on body language. But the same expressions can mean very different things: the wagging tail means a happy dog; the wagging tail can mean an angry cat. A cat will show her fear or defensive intentions by arching her back in the “Halloween pose,” according to Dr. Schwartz. A dog couldnt do that even if he wanted to because of differences in canine and feline muscle and skeletal structures. Dogs will express anger by curling their lips back and exposing their teeth. Interestingly, both cats and dogs will tuck their tails down around or between their legs to show submission.