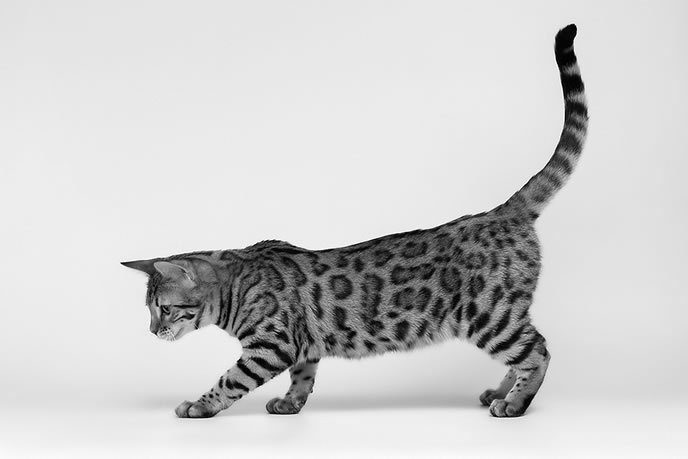 Your indoor cat needs and deserves daily play sessions to keep him physically and mentally fit. Play can help prevent him from engaging in destructive behaviors like shredding the sofa out of boredom or becoming obese from overeating to pass the time.

Bites and Scratches. But rough play can sometimes get out of hand and lead to serious injuries to you and other cats in the household. If you are seriously bitten or scratched, you could develop cat scratch fever, an infection caused by Bartonella henselae bacteria. In general, treatment requires antibiotics, but in some cases, especially in people with weak immune systems, hospitalization is required.

Some indoor cats who don’t have ample and suitable play outlets will lie in wait for you to walk down the hall so that they can pounce on your ankles. Some unsheathe their claws when people playfully attempt hand wrestling.

Protect yourself by tossing a toy mouse or even a paper wad down the hall in the opposite direction when you spot your cat crouched in wait for you. Instead of hand wrestling, invest in interactive toys like feather wands. Drag the toy along the floor and make erratic movements to motivate your cat to stalk, chase and pounce. You can also provide him with a soft plush pet toy he can grab, bite and kick with his back feet.

When it comes to play invitations, cats are far more subtle than dogs looking for a playmate — be it a favorite person or another cat in the home. “All cat play is predatory as opposed to dogs who also fetch and engage in other types of play,” says behaviorist Katherine Houpt, VMD, Ph.D., professor emeritus at Cornell. “Most owners with dogs can tell when they are getting over excited but not so much in cats. Most cats do pounce and chase, but few fetch.”

A Mouse in the Bed? One event that does spark curiosity and play in some cats is when an owner starts to change bed sheets. “Bed making brings out the play in many cats,” says Dr. Houpt. “I’m not sure if it is due the hand being under the sheet that, to the cat, may be moving like a mouse or mole. Cats who play when a person is making the bed can get so excited that they may bite and may not inhibit their bite.”

While any cat is capable of playing too rough, Oriental breeds, including the Siamese and Bengal, tend to be more prone to it than other breeds. “We’re not sure why they are more overly playful, and this seems to affect males more than females,” Dr. Houpt says.

To keep yourself safe, stop playing with your cat if he displays any of these signs of impending attack:

– Tensing the body and standing up taller with the hind legs more extended than the front legs.

– Meows that evolve into hisses or growls.

– Lashing the tail and pulling the ears back.

Disrupt your cat’s attack mindset by opening the refrigerator, shaking a bag of treats or making a loud noise. Withdraw attention as soon as he begins to play too roughly. Wait for your cat to calm down before resuming play, preferably with a wand toy, and never play wrestle with your hand. “Cats can also be taught to sit on a mat or touch a target with their nose for a reward or before play can resume,” Dr. Perry says.

Unlike dogs who exhibit clear signals such as play bows and friendly yelps in their desire to play with another dog, it’s trickier for a cat to know when another cat in the house wants to play. Cats are solitary by nature. In the wild, they sleep together, but each cat usually has his own hunting territories.

“There is not a well-recognized play signal in cats,” says Dr. Houpt. “One cat may pounce on the other and think it is in play, but the other cat may think it is an attack. When you think about it, play is something that house cats have the luxury to do, but feral cats outside working to find food to survive do not.”

Adds Dr. Perry: “One may stalk the other cat, ambush him, hop sideways, often with the tail erect, and then retreat. Sometimes, a cat will paw, bite or attempt to wrestle with the other cat to initiate play.”

Genuine play between two cats in the same house generally involves Cat A chasing Cat B and then Cat B chasing Cat A. But if the play begins to escalate into a fight, intervene safely. Cats have flexible spines and are capable of biting and clawing with their front and back claws. “Call them or make a loud noise to stop a fight,” says Dr. Houpt. “Or drop a towel or blanket over the aggressor to give the other cat a chance to escape.”

Never attempt to pick up one of the cats. “You risk redirected aggression by this cat who is likely to lash out at you,” says Dr. Houpt. “And never pick up a cat by the scruff of the neck. You are putting them in fight mode.”

Teaching your cat to play effectively and safely can improve his social skills and fitness. Play helps keep feline hearts healthy, joints limber and muscles strong. Play also allows cats to practice hunting and play-fighting skills. And don’t underestimate the added bonus of bolstering the connection between the two of you.