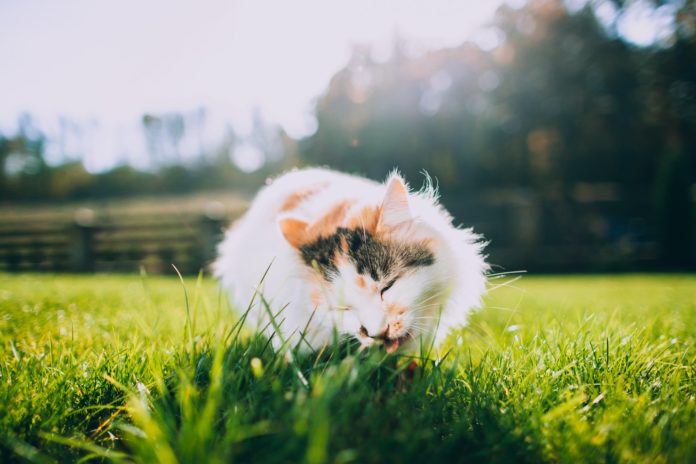 Benjamin L. Hart, DVM, PhD, at the School of Veterinary Medicine at the University of California at Davis, conducted a series of surveys with dog owners on grass-eating behaviors and published an article in the December 2008 Veterinary Medicine. He found that most dogs do not show signs of illness before eating grass and that only 22 percent vomited afterward. As for cats, Dr. Hart said that, “Cats typically do not appear to be ill before eating plants nor do they regularly vomit afterward.”

One theory behind feline grass-eating is that the plants make it easier for cats to vomit up things that are not easily digested, such as hairballs and bits of bone from prey. The grass irritates the stomach, triggering vomiting.

Plant material has been found in the stomach contents of wild felines, such as cougars. This could be due to intentionally eating grass or from the food that their prey had been eating. Wild cats also have been observed eating grass, including after consuming prey.

Cats lack the enzymes needed to properly digest plant materials, so grasses that get past the stomach usually go through the gastrointestinal tract intact. Some veterinarians recommend growing some grass as a snack at home for cats with chronic constipation issues.

Plant eating can be a behavioral issue due to curiosity or boredom, or something more involved, such as a compulsive disorder or a displacement behavior in response to anxiety.

If you think your cat is snacking on grass or other houseplants because he is bored, try introducing some new toys or a cat tree for him to interact with and make a point of working playtime into your daily routine. You also can break his meals into smaller portions that are hidden throughout the house either in bowls or in cat toys. Mental stimulation and physical activity will keep him occupied, which will cut down on undesirable behaviors.

Excessive munching on grass or houseplants, especially if it is a particular plant that the cat keeps coming back to, may be a compulsive behavior. See “When Cats Get a Little Crazy,” September 2018, at catwatchnewsletter.com.

Stressful situations such as moving, renovations, or adding a new pet can cause your cat to behave abnormally. Chewing releases endorphins, so your anxious cat may chew on plants to make himself feel better. Try to address the cause of your cat’s anxiety, and in the meantime, move the plant to a location that he can’t access.

Many cats just enjoy grass and plants. “If your cat craves vegetable matter in her diet, you can provide alternatives, such as oat grass, catnip, and catmint,although she may still continue to snack on houseplants.You can also try adding lettuce or parsley to her food bowl or switching to a cat food with a higher fiber content, advises the Cornell Feline Health Center. Most pet stores now sell grass-growing kits for at-home use.

Many common houseplants are toxic to cats, including but not limited to lilies, poinsettia, hibiscus, tulips, and ficus. For a complete listing, see the ASPCA’s lists of toxic and non-toxic plants at: aspca.org/pet-care/animal-poison-control/cats-plant-list.

You can make houseplants less appealing by using a pet repellent or by wetting the plant leaves and sprinkling cayenne pepper on them. Alternatively, advises the Feline Health Center, a tower of unbreakable, light cups booby trap may be placed around the pot to startle your cat when she begins to chew.

Many pesticides and herbicides are harmful to your cat, so avoid bringing in greenery from unknown lawns as a snack for your cat. If you walk your cat, prevent him from eating grass away from home, as you don’t know if it has been sprayed.

If you know or suspect that your cat has eaten a toxic plant or are concerned about pesticide/herbicide exposure, call your veterinarian and/or a pet poison helpline immediately to determine the best course of action for your situation. Exact treatment may vary depending on the particular plant consumed or the chemical that was used on the lawn.

Cats sometimes get blades of grass lodged in their nasal passages, either from inhaling the grass directly or from it going the wrong way during swallowing and working its way up over the soft palate. The cat may have discharge from one or both nostrils, sneeze, swallow repeatedly, or snore. This is less common than upper respiratory infections but is a possibility if either you know that your cat has been eating and/or playing in grass a lot lately or if respiratory signs are persisting even after treatment.