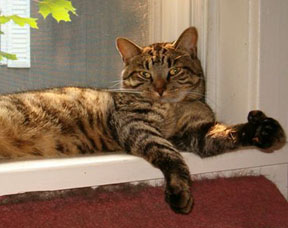 Larry Houck, a cat owner from Harrisburg, Pennsylvania, has a neutered male cat with more than the normal five toes on his front feet, a condition called polydactyly (poly meaning multiple and dactyly referring to the fingers and toes). Houck named his cat Rocky, after the movie character, because the cats three extra toes on each front paw make him look like hes wearing boxing gloves. Like Rocky, most polydactyl cats have an endearing, even comical quality.

Polydactyl cats are often referred to as mitten cats or Hemingway cats after the plethora of extra-toed cats owned by the writer Ernest Hemingway at his home in Key West, Florida. In fact, descendants of his original polydactyl cats still proliferate at the Hemingway home, which is now a museum.

Polydactyly, also called hyperdactyly, occurs in several species of animals, including cats and humans. In cats, polydactyly can result in any number of extra digits. Most of the time, all four feet are affected, says Dr. Solveig Pflueger, MD, director of medical genetics at the Baystate Medical Center in Springfield, Massachusetts and chair of the genetics committee for The International Cat Association (TICA), and on the back legs, the cat may have just a dew claw. Although the number of extra toes varies from cat to cat, a total of 28 toes seems to be the upper limit.

A Matter of Genes
Polydactyly is due to the presence of an autosomal dominant gene, Pd (see sidebar). It is a dominant trait with nearly 100 percent penetrance. A cat that has the gene will show the gene, says Dr. Pflueger. If a polydactyl cat mates with a normal-toed cat, on average half or more of the offspring will show polydactyly. The polydactyly trait probably arose as a spontaneous mutation, and a polydactyl kitten from two normal-toed parents may represent a new mutation event, explains Dr. Pflueger.

The gene for polydactyly, however, shows variable expressivity (see sidebar), which means that some polydactyl cats have more toes than others. Little has been learned about how the polydactyly gene functions, however. Up until recently, we saw polydactyly only in household pets rather than as a result of selective breeding, says Dr. Pflueger, but because polydactyly is now accepted within the Pixie Bob breed [recognized by TICA], it may be possible to get more information on the trait.

The autosomal dominant gene Pd produces a condition that deviates from normal but does not compromise the well-being of the cat. But another unrelated gene, RH, produces a severely crippling condition called radial hypoplasia that resembles polydactyly. A cat suffering from radial hypoplasia has an unusually small, twisted or absent radius, producing the twisty cat phenomenon. Although extra toes may be present in RH cats, the normal (Pd) form of polydactyly is not harmful. The gene that eliminates or produces a poorly developed radius has nothing to do with the normal form of polydactyly, says Dr. Pflueger.

From There to Here
Polydactyly was noted in the general cat population as early as the late 1800s. Polydactyl cats are found all over the United States, but New England and Florida, especially the Keys, seem to have the greatest concentration of them. Polydactyl cats are also found in Great Britain, Southeast Asia and other parts of the world. No one is entirely sure how polydactyl cats came to America, or even if they came here from elsewhere. Some people believe polydactyls are an American phenomenon and made their way to other parts of the globe on sailing vessels.

Other folks believe the reverse. Are they separate mutation events or the result of human commerce? says Dr. Pflueger. People bring cats with them wherever they go. Whatever its heritage, if you have a polydactyl cat, you may consider yourself lucky, as did sailors in previous centuries who traveled with the multitoed mousers onboard.

Keep your polydactyl kitten healthy, just as you would a normal-toed kitten, with regular veterinary checkups. Trim his toenails regularly to prevent them from becoming ingrown. If your cat has a thumb with an extra toe in between, there may be an increased risk of ingrown toenails, says Dr. Pflueger.