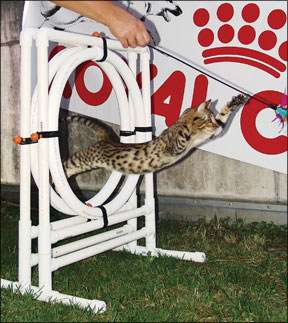 The large, bobtailed cat was racing through the agility course so quickly that his owner could barely keep up to direct him. Running up and down ramps, leaping through a suspended hoop, darting in and out of weave poles, the pixie-bob had speed. And then, the cat stopped. He was at the last jump and his owner wasnt. “He looked up at her and seemed to say, You want me to jump through this, right?” recounts Susan Lee, a breeder of Havana

browns and Maine coon cats in Okemos, Michigan. The cat must have received the signal he was waiting for, because he sailed over the last jump – still well before his handler had caught up with him.

Agility, which has been tremendously popular with dogs since the 1980s, is beginning to catch on with cat owners. The first exhibitions of agility for cats were held in 2003 by the International Cat Agility Tournaments (ICAT). Within a year, member clubs of The International Cat Association (TICA) were adding ICAT agility competitions to their show lists. Today, cat agility competitions can be found at both TICA and Cat Fanciers Association, Inc. (CFA) shows – complete with awards for adult cats, kittens and junior handlers, as well as opportunities to garner placement points toward several different levels of agility titles.

In a cat agility competition, the goal is to go through a course of six to 14 obstacles (depending on the class) with the fastest time and fewest faults possible. Faults include such things as a cat refusing to go through a tunnel, scooting under instead of over an obstacle or knocking a pole down from a bar jump. To help keep the cats and kittens on track, the course is set up in an area measuring anywhere from 400 to 1,200 square feet, depending on the limitations of the show hall. The ring perimeter is fenced (four to six feet high) with a lightweight screen or mesh and PVC piping.

Cat agility is always a crowd pleaser, relates Ms. Lee, who is a TICA judge as well as an official for (and participant in) cat agility events. Cats can be unpredictable, much to the amusement of the crowd, and they can also be spectacular: A young Bengal kitten that excelled at agility truly looked like a running waterfall of colors as he navigated his way effortlessly through an advanced course. And then there are those felines that are just cute. In particular, Ms. Lee recounts the story of a pair of kittens going through an agility course that absolutely charmed judges, participants and the audience alike. “The two little cream Persian kittens running together [through the course] were precious,” she relates, adding that what made the kittens performance that much more captivating was the fact that they were working the course together: “The more outgoing one showed the shyer one what to do,” she says.

To get started in feline agility, you dont need experience, but you will need a willing cat (no need for a registered show cat; just your plain, lovable “housecat” is fine!), a lure and a little patience. Deb Decker, owner of Siddhis Havana Browns in Arlington, Texas, explains that she likes to start cats and kittens with a long teaser toy: “One that you can drag,” she says. “First you tap on the obstacle with the teaser. Then go to the other side [of the obstacle] and drag the toy to get the cat to go through it.” It doesnt take long for most cats to figure out what youre asking for. “Theyll get to the point that theyll know what you want them to do,” says Ms. Decker. “Youll put them down and you just start running and pointing at the obstacles.”

Though you would think that the fastest and most athletic cats

would reign supreme in this sport, this isnt always the case, says Pat Harbert, owner of OhMy Abyssinians, Bengals and Highlanders in Choctaw, Oklahoma. “The most active cats are not always the best. My Abyssinians are the fastest by far but distract easily and may go in the opposite direction just as fast if something catches their attention,” she says.

The cats that do the best in agility dont belong to any particular breed, but they do seem to share a similar quality: they are involved with their owners. “Cats that have a strong bond with their owners tend to do better,” says Ms. Harbert.

A beginners agility set intended for small or toy-breed dogs is often perfect for a cat as well. Sets usually include weave poles, a set of two jumps, a hoop jump and a tunnel for less than $100. Or you can get creative and use household items to make your own home course. “I set up obstacles at home,” confides Ms. Harbert. “I use steps, jumps from one chair or footstool to another, weaving in and out of gallon jugs of water, going through a childs play tunnel and using a ladder [laid down] on the floor.”

Teaching your cat or kitten to follow the lure or teaser and practicing different obstacles at home can help prepare him for competition. Its perfectly okay, however, to enter a feline in a cat agility contest with no practice whatsoever. Once you get hooked on the sport, your biggest challenge may be in finding enough agility events to satisfy the agility “bug.”

Agility events are not offered at every cat show, but as interest continues to climb, these fun events are being offered at an increasing number of shows. The CFA, TICA and ICAT websites all provide a schedule of upcoming shows and indicate if feline agility events will be offered.

If you plan on entering your cat or kitten at a show, be sure to read the entry form carefully for exhibitor instructions. Typically, kittens must be at least four months of age to be entered in a show, and household pets eight months and older must be altered. Some shows also require proof of rabies vaccination.