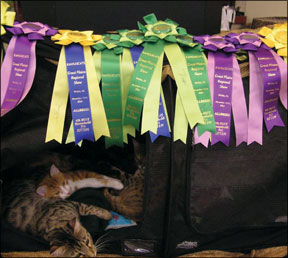 According to Caroline Fralia of Ft. Worth, TX, “Fenix” is “just a brown, mackerel tabby cat” that she rescued as a kitten. Fenix may have come from humble beginnings; however, the tabby cat is quite famous in the show ring: “Fenix of Strayinc” attained the title of Supreme Grand Master (SGM) in 2002, as well as the ranking of 20th in the world in The International Cat Association (TICA) Household Pet (HHP) division.

Not Just for Purebreds

Who would have thought that a rescued cat could become a noted show kitty? “The majority of people showing either grew up with

an HHP or started showing with an HHP,” says Fralia, who started showing in 1992 with a pet cat. “It was interesting,” she laughs. One of her cats let her know immediately that showing wasnt for him, but another one gave her more hope – and thats all it took.

The excitement of showing her own pets drew Fralia to cat showing; however, it was the people who made her want to stay. Fralia notes that everyone – from fellow competitors to judges – was extremely supportive. “Theres a sense of camaraderie among [HHP] exhibitors,” she explains.

Debra Decker, of Arlington, TX agrees. Decker, whose first show kitty, “Quadruple Grand Master (QCM) Rum Tum Timmy” – a Russian Blue/Maine Coon cross and former shelter cat, relates that theres something special about those who show their family pets: “Theres a passion and pride of ownership.” Decker also notes that not only do the exhibitors have fun showing their cats but the “judges love HHPs. Many of the judges will say that the HHP class is their favorite to judge.”

Mixed breeds, cats of unknown origins and purebred cats (without papers or with faults that would disqualify them from the breed ring) can all be shown in the household pet class. At shows, household pets are divided by age: kittens (four to eight months), and adults (eight months or older and altered). Additional class divisions are made by color: solid, tabby, tortie, shaded, pointed, solid/white, tabby/white, tortie/white, shaded/white and pointed/white.

Kittens and cats with previous injuries and/or scars are allowed to show in HHP, since many of these cats are adopted or rescued. “Weve had a three-legged cat, a cat missing its ears [a survivor of a fire], and a cat with a knot in its tail,” explains Decker, noting that the cats “dont have to be perfect.” The cats do need to be in excellent health and peak condition, however. The judges will examine the cat or kittens ears, eyes, teeth and coat. They will look to see that toenails are trimmed neatly. (In TICA, HHPs may be declawed; however, the Cat Fanciers Association [CFA] requires a full set of nails.)

Perhaps most importantly – and a requirement that is unique to the household pet division – the kittens and cats are judged on their character. “The cats that will play with toys and give kisses to the judge do well,” says Decker, who confides that her current HHP kitty, “Regional Winner SGM Cocoa Pebbles of Siddhis” (an adopted Havana Brown/ Oriental shorthair mix a/k/a “Beaner”), might do better in the show ring if she were more playful. “Beaner” purrs for the judges; however, big, playful activity isnt really her thing. “She plays with a toy [for the judges] maybe three times a year,” laughs Decker.

Another unique facet of the household pet class is that the judges will want to know the “story” behind your cat. Whether your cat is a survivor of Hurricane Katrina, rescued by animal control from a drug bust or simply the cutest kitten at the shelter that “mewed” your name, the judges want to learn how your kitty became a part of your family. And the greatest part? The judges really do want to hear your story. How cool is that?

At the End of the Day

If your feline enjoys cat shows and you walk home with an armful of ribbons, you might have found yourself a new hobby that could take you as far and wide in this country (and others!) as you want to travel. If your cat really doesnt enjoy shows? Well, thats okay, too, says Fralia: “Youve still got a beautiful cat.