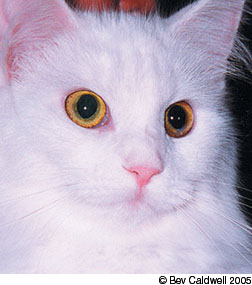 Ever since the Egyptians discovered, admired and cultivated the many marvelous attributes of cats – about 4,000 years ago – humans have made cats an important part of their culture. Some societies have worshipped them; others have demonized them. In some societies, it was a crime to kill a cat, even by accident; in others, cats were considered a tasty part of their menu.

In the Beginning
Experts believe that the domesticated cat descended from the Libyan wild cat (Felis silvestris libyca). This feline was larger than the domesticated cat and resembled todays tabby. There is evidence from the island of Cyprus that cats and humans had some form of relationship as long as 8,000 years ago, according the Los Angeles Museum of Natural History.

Archaeologists have found the bones of cats, mice and humans together. It was a symbiotic relationship between cats and humans, says Stefanie Schwartz, DVM, MSc, a board certified veterinary behaviorist at VCA South Shore Animal Hospital in Weymouth, Massachusetts. People found that cats were useful creatures to have nearby.

Apparently, the ancient people of Cyprus appreciated how cats killed the mice that probably plagued their food supply.

True domestication – with cats becoming household companions – probably occurred in Egypt about 2000 BCE. The ancient Egyptians, who ended up embracing the cat more than any other culture on earth, most likely captured the kittens of wild cats and hand-reared them.

The cat became the friend of the farmer while the dog, domesticated many centuries earlier, was the partner of the hunter. Egyptian cats were tamed, fed and kept to control the mouse population in the fields and granaries, according to the Los Angeles Museum of Natural History. The major difference between cats and the other animals domesticated by the Egyptians – cattle, sheep, fowl and baboons – was that the cat was free to come and go as it pleased.

Around 1950 BCE, cats began to show up in religious reliefs in Egypts tombs. During the period from about 1000-350 BCE, the cat came to represent both Bastet and Sekhmet, the goddesses of fertility and of war, respectively. The sacred animals were bred in temples, and it was death to any human who harmed a cat.

Cat and Other Cultures
Several other ancient societies also revered the cat. Many of these cultures that related fertility and the life force to cats did so because they extolled the cats strong instinct for motherhood. The Norwegian goddess Freyja, goddess of fertility, was depicted as riding a chariot drawn by cats. According to the Los Angeles Museum of Natural History, the Hindus believed that it was necessary to feed at least one cat in the household to extend the lives of its human family members. In Japan, the preservation of life is represented with the manekineko, or beckoning cat, legend, which is based on the story of a cat that saves a kings life. India has a goddess of maternity, Sasti, who is shown as a cat.

But not every culture liked cats. In the Middle Ages during the time of the plague, explains Dr. Schwartz, European societies looked for scapegoats. Certain people were identified as witches. Somehow, cats, especially black cats, became associated with evil and witchcraft. Both these cats and their owners were condemned to death. In America, Halloween still playfully celebrates the scary black cat. Unfortunately, says Dr. Schwartz, there are also satanic cults that torture and sacrifice all-white or all-black cats at Halloween.

Dr. Schwartz believes that, although cats were originally domesticated thousands of years ago, true worldwide domestication of cats – in which cats have been bred for household pets – occurred relatively recently – within the past couple of hundred years. And in cultures that bestowed greatness on cats in ancient times, cats have now fallen out of favor. Today, throughout the Middle East where cats roam wild in the streets, including in Egypt, people consider them vermin and pests.

Cats have endeared themselves to many cultures for their helpfulness, mouse-hunting skills, cleanliness, sense of independence, beauty and mothering skills. One of the most intriguing aspects of cats and culture is how the cat is viewed differently from the dog, even though both were originally domesticated in ancient times. Says Dr. Schwartz: We havent domesticated cats the same way or with the same intensity as we have dogs. If we left them alone, I think cats would revert easily back to the wild state, but dogs might not.