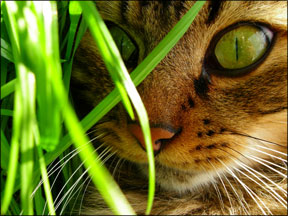 Ever feel like you could get lost in your cats eyes? Although we usually associate cats eyes with the color green, they actually come in many colors. They can range from blue to copper, with a variety of blue-green shades in between. (But all kittens are born with blue eyes – the same as human babies.)

the pigment melanin, and in cats it ranges from very pale yellow or tan to deep orange or brown. “The eye also derives some pigment from the retina in the back of the eye, causing a blue-grayish color,” says Paul Maza, DVM, of the Department of Biomedical Sciences in Cornell Universitys College of Veterinary Medicine.

The end result can be compared to putting a sheet of blue-gray glass over the iris, thus resulting in your cats unique eye color. Since a cats eye color depends on several genetic factors, one set of feline parents can produce a wide range of eye colors in their kittens.

Breed Tendencies. The Siamese are noted for their deep blue eyes and Persians often sport brown, coppery eyes. But mixing breeds can produce a variety of eye colors; occasionally, youll even find a cat with two different colored eyes.

“In the case of true feline albinos, the eyes are pink,” says Dr. Maza. “This is due to the lack or absence of pigment in both the iris and retina, and the pink color of the eyes is from the redness of the blood vessels showing through from the eyes interior.” However, differences in iris or eye color have no bearing on the visual acuity of the eye of the cat, says Dr. Maza.

Night Eyes. Who hasnt stared back at the green or gold glowing eyes of a cat in the dark? “But a cats eyes dont actually glow,” says Fred Scott, DVM, interim Director at Cornells Feline Health Center. “Theres a membrane beneath the retina called the tapetum lucidum that reflects light. When a cat opens its pupils wide, as a response to being in the dark, light is reflected off the cells of the tapetum lucidum, giving the appearance that the eyes are glowing. “

“Scientists estimate that cats are some six times better at light sensitivity than humans,” says Dr. Scott. “This is primarily due to a cats tapetum lucidum (as discussed above) which reflects light back through the retina to maximize the eyes reception of light rays.”

Colorblind Myth. We used to think that cats were colorblind, but scientists have now determined that cats can tell the difference between certain colors – especially blues and greens. That may come as a surprise to us, but for cats, color doesnt appear to be very significant because it doesnt affect their survival. As vision goes, detecting movement is much more important than color for a cat to find its prey and escape from its predators.