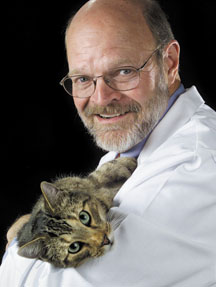 Like many veterinarians-to-be of his era, Jim Richards had boyhood visions of becoming the next James Herriot. The old veterinarian who treated the hogs and cows on the Richards farm inspired some awe out there in the very flat fields beyond New Paris, Ohio. He once let me carry the syringe and warm up the penicillin in my hand, Dr. Richards remembers. This was a great responsibility for a little boy, and an honor.

Cats, of course, were not a new discovery for the young Dr. Richards. At one time, there were more than 20 of them on his family farm – a whole herd, as he puts it. I got to be good buddies with the kitties, he says. I knew about life in cat colonies and learned by observing their behavior. In those days before most feline vaccines were available, he also saw the devastating effects of feline distemper and other infectious diseases.

Once he had gotten in touch with his feline side – or come to his senses, as some would say – Dr. Richards tried to open an all-feline practice in the early 1980s.  But area lenders couldnt see the future in his furry vision, and turned him down.  I was pretty devastated at the time, he says.

The opportunity to head up the diagnostic consultation service of the Cornell Feline Health Center in 1991 changed all that. In retrospect, Im really glad I wasnt able to start my cat clinic, says Dr. Richards. If I had, I wouldnt be here!

Spending his days advising veterinarians and cat owners about feline health issues – and serving as a needed link between private practitioners and Cornells veterinary faculty – he truly found his niche.

The centers director since 1997 and a past president of the American Association of Feline Practitioners, Dr. Richards currently chairs the education/ communication subgroup of the Vaccine-Associated Feline Sarcoma Task Force, a joint effort of the American Veterinary Medical Association and the American Animal Hospital Association. In addition to his many scholarly publications, he is author of The ASPCA Complete Guide to Cats. He lectures frequently and has developed Cornells annual feline symposium into a major event that draws veterinarians from all over the world.

Cornell doesnt put a lot of boundaries around what you can do, he says. Anything that has to do with cats in some way, shape or form, the Feline Health Center will be involved with it. For Jim Richards, thats not just a perfect fit – thats the cats pajamas.

The Cornell Feline Health Center provides educational information and sponsors feline health research at Cornell. To become a member or to set up a gift membership, call 607-253-3093. Find the CFHC on the Web  at www.vet.cornell.edu/FHC.