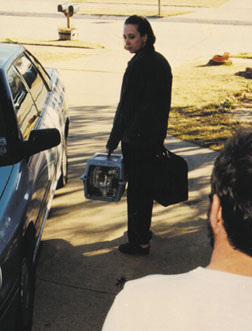 Watching the heartbreaking images on television of dogs and cats huddled on rooftops or wading through fetid water after the recent wave of hurricanes slammed into the Gulf Coast, we became painfully aware that disaster preparedness for pets is woefully lacking. Thousands of people were forced to leave their homes without their beloved animals in tow. Many others remained steadfast by refusing to leave without them. Animal owners displaced by a disaster should never have to make the fateful decision to evacuate without their companion animals. Legislators across the country are working toward a solution to this distressing problem.

Representatives Tom Lantos (D-CA), Christopher Shays (R-CT), Barney Frank (D-MA), Don Young (R-AK) and James Oberstar (D-MN) have introduced the Pets Evacuation and Transportation Standards Act, H.R. 3858 (PETS Act), which would require state and local authorities to include pets and service animals in their disaster evacuation plans. Specifically, states are required to include a plan for pets in the emergency preparedness plan they submit to FEMA in order to receive emergency relief funding.

Clearly, this is an issue that we have to deal with, and Im happy that legislation is being considered, says Dr. James Richards, director of the Feline Health Center at Cornell University. Whenever people are required to evacuate, there should be provisions made for their animals as well. Thats very important.

After any type of disaster, evacuees are able to seek shelter at Red Cross facilities and other temporary venues. For well justified health and safety reasons, however, animals are not allowed. Thats why it is critically important that alternate plans be made for our nations smallest victims. Please ask your U.S. representative to support the PETS Act (H.R. 3858). Visit the Humane Society of the United States Web site at: https://community.hsus.org/campaign/pets_act_house and fill out the online form. It will take only a minute of your time and will go a long way toward ensuring a safer future for our companion animals.

Another Way to Help
Three Dog Bakery, a national chain of bakeries for dogs, recently launched a Leave No Man Behind, Leave No Pet Behind program in memory of those animals who didnt survive Hurricanes Katrina and Rita. Their new T-shirts help generate awareness and funds for this project, and 100 percent of the profit from the sale of these shirts will be used to provide food, clean water and a safe environment for the staggering numbers of animals left behind. For more information, or to purchase a T-shirt, visit www.threedogbakery.com/.