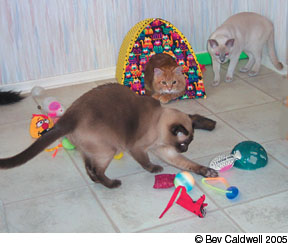 Youre relaxing on the couch after doing some work in the garden. Suddenly your cat darts across the room in front of you and hides behind the curtains. You get up, sneak over to the curtain and peek at your cat. Whoosh! Now shes off behind the couch, peering out at you. Congratulations! Youre engaged in one of your cats favorite activities – playing chase with you.

If you dont regularly play with your cat, youre missing out on one of the most wonderful things about sharing a home with a feline.

Serious Playing
Cats were made to play. And they will play under a variety of circumstances – alone, with other cats and pets, and with their human companions. Given a chance, they will often surprise you with the games they invent to amuse themselves.

Theres more to feline play than just fun, however. All cat play is predatory behavior, says Katherine Houpt, VMD, PhD, the James Law Professor of Animal Behavior at the College of Veterinary Medicine at Cornell University. Most members of the cat family – from domesticated cats to lions in the wild – engage in some kind of play, often well into adulthood. Playing helps kittens improve their coordination and practice their hunting skills.

Indoor cats are usually not given the opportunity to be predators, says Dr. Houpt. But they still seem motivated to play and, therefore, hone their predatory skills.

One of the best kinds of entertainment is interactive playing – when you take time to play with your feline. Besides being just plain fun for both of you, playing is a great way for your cat to get exercise and maintain a healthy weight. Playing is also a positive way for your cat to release energy. Cats who are often too aggressive – nipping their human or animal companions – will often curtail their bad habits when stimulated to play vigorously.

If a cat is shy, playing can help to draw her out. And playing can often help a cat get accustomed to a new home. In multi-cat families, playing together helps promote friendliness among feline members of the household. And sometimes the best part of playing with your cat is strengthening the bond that you share.

Games Cats Play
Although most cats enjoy playing, not all cats like to play the same things or with the same objects.

But youll notice that most kittens and cats respond to movement. Thats why cats chase shadows or sunbeams on the floor or even up the wall or curtains. Theres even some evidence that some cats prefer to play in dim light, most likely stemming from their predatory habits at night. So turn down the lights and see if your cat becomes more playful.

Some cats even like to play into their senior years. If an older cat is healthy and of normal weight, encourage him to play, says Dr. Houpt. Its good for your cat both physically and mentally.

Youve probably already discovered that your cat likes to chase small objects – balls, wads of paper, catnip toys. Make sure, however, that you put most of the toys away after your cat is finished because your cat can get bored with items that are left lying around all the time.

One game your cat will love is hide-and-seek with a toy. Cats really enjoy stalking a partially-hidden object. For example, lead your cat to a door. Get on the other side of the door and close it almost all the way. Take a piece of paper or a string toy and slip it back and forth under the door. Start off moving the toy slowly and then gradually wiggle it more rapidly. You can also slide the toy up the side of the door.

Then watch your cat take notice: Her eyes will enlarge; shell tilt her head, wiggle her hindquarters – and pounce. She may crouch down and slip her paws under the door to try to pull the object out. Keep playing until she tires you out!

There are a few variations on this theme. Try this: Rustle a toy under a blanket on the bed, occasionally slipping it out from under the blanket. Or scrape a toy against the shower curtain while your cat crouches down in the bathtub. Cats also like to play on staircases, batting at things through the rails of the banister, says Dr. Houpt. Or they will sit in a plastic laundry basket and attack toys dangled outside it.

Of course, theres nothing like a paper bag or small cardboard box to get your cat going. While your cat hides in the bag or box – or under a pile of newspapers – dangle an object nearby, and watch your cat suddenly jump out from her hiding place to whack the toy. Then shell retreat again to await the next chance for attack. All these antics give your cat a chance to watch, wait and then hunt the toy down – and entertain you at the same time.

Rules of the Game
Playing usually comes naturally to a cat. But to make it a great experience for both of you, keep the following in mind:

Remember that active, inquisitive little kittens will play with anything. Just as you would with a human baby, keep dangerous items like string, ribbon, rubber bands and other possibly ingestible objects out of reach unless you are there to supervise. Its wise to take the same precautions with adult cats, too.

Dont let beguiling kittens chew on your fingers and toes. Teach them that your hands and feet are not appropriate toys. If you dont, you may regret it when your kitty has grown and developed full-size teeth and claws, says Dr. Houpt.

Be aware, says Dr. Houpt, that cats usually like to play in the early morning and late evening. In the middle of the afternoon, your cat may balk at playing because he prefers to sleep – another all-time favorite feline activity.

Let your cat win. Give your feline a good run and challenge, but let your cat score a victory in the end and savor his victory.

Keep a rotating array of toys so that your cat doesnt get bored.

Follow your cats lead and pace. If your cat isnt interested in playing, dont force it. Five minutes is a long time for a play session, says Dr. Houpt. After a short break, your cat may want to play again for another five minutes or so.

After a fun play session, end with a lot of praise for your kitty. And a little treat wont hurt either – for you and for Kitty!