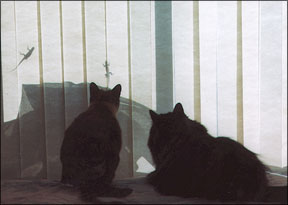 My 25-year-old daughter Remy called me at 1:30 a.m., terrorized because her cat Kit had brought a dead mouse into her bedroom. At 2:30 a.m., Remy called again to find out what to do with a

live mouse her cat had caught.

I suggested that Remy do what weve all been told to do when our cats bring us a little mouse gift: First, praise your cat for thinking of you. Next, get rid of the mouse. But, to my surprise, I was

wrong. And you may be, too. According to animal behaviorists, your cat is not bringing you a gift, and you shouldnt praise her for it.

The Meaning of the Mouse

“Your cat is actually bringing you a mouse to teach

you to hunt and kill it,” says Katherine A. Houpt, VMD, the James Law Professor of Animal Behavior at Cornell Universitys College of Veterinary Medicine. “Its the same thing the mother cat does for her kittens.”

Cats are born with a chasing and hunting instinct, but not necessarily the skill to go along with it. The mother cat teaches her kittens to kill and eat prey. (Indoor cats may chase and kill mice, but rarely eat them.)

The next stage is a turning point. The mother brings back live but wounded mice. The kittens play with the slow-moving mice, eventually killing and eating them. Gradually, the kittens become more coordinated at tracking movements and skillful at pouncing on the prey. Pouncing helps the kittens learn to gauge distance.

As the kittens become more experienced, they begin to hunt with their mother and kill mice on their own. By four or five months of age, kittens are sufficient mouse catchers. But theres something to be said for more experience. “Research shows that compared to older cats, six- to eight-month-old cats catch fewer mammals,” says Dr. Houpt.

The whole process of mothers teaching their kittens can be compared to the way in which your cat may try to teach you. First, cats usually bring dead mice to their human companions. Then they bring over live mice, expecting their human companions to get the idea very quickly. Experts note that spayed females are more likely than their male counterparts to catch mice for their humans.

training material? “There are very few instances in nature where animals bring gifts to each other,” says Dr. Houpt. Eating and survival are at the root of most behaviors that one animal exhibits toward another. And your cat considers you a kindred cat of sorts.

So what do you do if your cat drops a mouse at your feet? If you praise your cat, youre encouraging her to bring you more mice,” says Dr. Houpt. “Youre reinforcing a behavior you really dont want your cat to repeat.”

Therefore, dont praise, but dont scold your cat, either. After all, your cat is following her predatory instincts that are necessary for survival. Your best bet is to “act as neutral as possible and quickly get rid of the mouse.” Dont make a big fuss over the mouse – either way – because your cat will interpret excitement as a reason to keep on catching and bringing you mice.

A dead mouse is difficult enough to deal with for most people, but a live mouse is another story. “Its a problem,” says Dr. Houpt. “Theres no easy answer. If you distract your cat somehow, she will usually drop the mouse. If the mouse is unhurt and you live in a rural area, you can release the mouse outside.”

Putting the mouse outside on the streets of New York City, where my daughter lives, isnt the best idea for the mouse. “If possible, take the mouse to your veterinarian or the animal shelter, where the experts will decide on the best course of action,” says Dr. Houpt. “But be very careful and try not to touch mice with your hands. They can nip you and can carry diseases such as Lyme disease or the Hanta virus,” a rare, but very dangerous illness transmitted to humans by rodents.

Experts understand why cats hunt, kill and bring mice to their human companions. But the big question is, why do cats torture their prey? “We really dont have a good explanation for that,” says Dr. Houpt. “Its possible that this behavior represents pent-up aggression, especially in indoor cats.” If your cat doesnt have enough predatory adventure, she may be bored. So when she does catch a mouse, she wants to prolong the fun.

Cut Down on Catching Mice

Cats will be cats when it comes to mice, but here are a few things to do to try to stop your cat from indulging:

Provide your cat with a collar with a bell on it. This may warn the mice to stay away.

Keep your cat in your bedroom at night, because mice are active at night.

Arrange for a more tolerable way to get rid of your mice.

Get your cat some exciting motion toys to satisfy her hunting needs. v