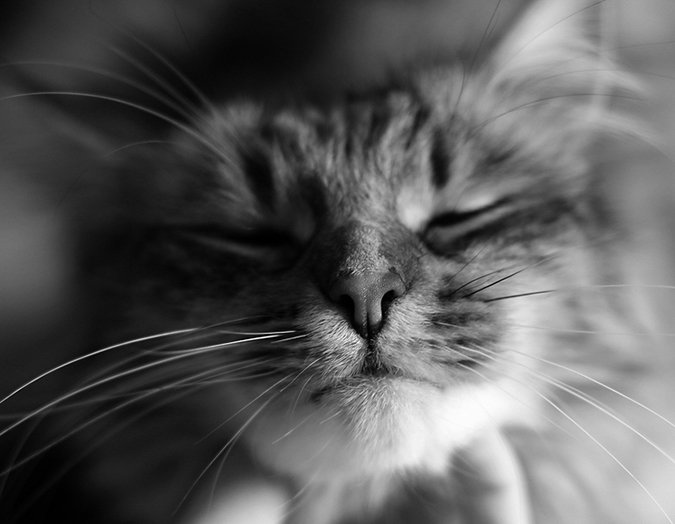 You’ve probably seen those clever cats on the Internet praying, rolling over and high fiving and wonder how they do that. All you want is for your cat to stay off the kitchen counter.

It may come as a surprise, but you can train your cat to demonstrate a variety of behaviors. The biggest misconception people have about cats is assuming that they cannot be trained. They usually can if we avoid common mistakes in training. One that owners routinely make is untimely corrections, says behaviorist Katherine Houpt, VMD, Ph.D., professor emeritus at Cornell University College of Veterinary Medicine.

She estimates that she has seen about 1,500 cats in her consulting career and has learned that it takes approximately the time for a dropped pen to hit the floor — a very short time indeed — for a cat to connect an action with a correction. Correcting a cat for a behavior beyond this short window of time after the behavior will not be fruitful. “The cat will not grasp any cause and effect,” Dr. Houpt says. “It just serves to make his behavior worse.”

Yelling at cats doesn’t work because they don’t respond to auditory punishment, Dr. Houpt says, nor do aversive techniques, such as shaking a can of coins, spraying them with water or flicking them on their nose with your finger. “Those certainly won’t endear the cat to the owner.” They also border on abuse.

The best option: “Ignore the cat and try to determine his motivation and fill that need some way that is acceptable to owner and cat,” Dr. Houpt says.

“We often tell cats what not to do,” says Pamela Perry, DVM, Ph.D, a resident in behavior at Cornell. “It is human nature to scold, but we should instead look for a way to teach them to do something that is appropriate and incompatible with the undesirable behavior. In other words, instead of saying, ‘Don’t do this behavior,’ say. ‘Do this one instead.'”

Here are other training challenges that you may face with your cat:

Problem: Cats are not as food-motivated as dogs.

Solution: Professional trainers who work with cats in films and television use a spoonful of diluted canned food, says Dr. Houpt. Most cats, especially those on a dry diet, adore canned food — try that. Also, training before a meal when cats are hungry helps improve their willingness to change behavior.

Problem: If you’re using petting as a reward in training and you pet the cat where he doesn’t like it, he may bite. Cats prefer to be petted from their nose up to the forehead and under the chin — not behind the shoulders or up the tail, Dr. Houpt says.

Some cats don’t want to be touched for very long. You can pet some three times and the fourth time they’ll bite you. This is termed petting intolerance, and it is common in cats, says Dr. Perry. “These cats appear to solicit your attention, but then they want only a limited amount. It’s important to understand and accept those limits.”

Watch for signals that the cat wants you to stop, such as tail twitching, ears turning out or back or their skin twitching. He’s getting ready to bite. Dr. Houpt says it’s his equivalent of objecting, “Stop, I can’t take anymore!”

Solution: Teach the cat to tolerate petting. Pet the cat once and then give him a tasty treat, Dr. Houpt says. The next day pet him twice and treat. The third day, pet him three times there and treat, and so on until he tolerates it for a while.

3. Not recognizing why your kitten shouldn’t use you as a play toy.

Problem: You can wind up with bites and scratches, which can be annoying and imperil your health if you have a compromised immune system.

Solution: Provide more play and exercise to burn off energy. Use a laser pointer and predatory play toys such as a CatDancer, which is a toy on a spring wire you dangle for him. “That way you can meet the cat’s motivation to play aggressively without using you as the toy,” says Dr. Houpt.

4. Losing your patience about house soiling.

Problem: Your cat goes outside the litter box.

Solution: If you actually catch the cat in the act of inappropriately urinating or defecating, you can say “No!” However, a cat may not use the box because he is not feeling well. Medical causes should always be explored. For example, a bladder infection could cause him to connect its pain with using the litter box. Arthritis may prevent easy entry to the box.

If anxiety or stress is the reason the cat is not using the box appropriately, your untimely correction — the one that he cannot connect to a behavior — will simply make him more anxious, Dr. Houpt says. If you rub his nose in the soiled area as punishment — which is abuse — he may become afraid of the combination of you and that location, but it won’t affect where he goes.

Problem: The odor and its aversive effect diminish with time.

Solution: Don’t rely on sprays. Provide more scratching posts. Cats scratch to sharpen their claws and mark their territory — they’re innate behaviors. Get scratching posts that don’t wobble and can’t tip. Cats generally like floor-to-ceiling carpeted cat trees, although some like horizontal scratching pads. Cats enjoy objects they can sink their claws into, such as sisal or a hairy string. Dr. Houpt recommends placing a scratching post next to the item you wish to protect or blocking access to it.

It’s normal for cats to scratch as a way of communicating. Dr. Perry says that scratching around their territory is a visual as well as olfactory form of communication. If you don’t want them to scratch the furniture, give them an acceptable substitute — but it might take a bit of detective work to get the right size, material and location for a scratching post. Most homes don’t have enough scratching areas, so cats will scratch the furniture or doorways or whatever appeals to them. “Most of us can improve upon the number of scratching surfaces we provide for our kitties,” says Dr. Perry.

Place double-sided sticky tape on furniture where the cat scratches to deter him from using it to sharpen his claws. Smooth shields on the furniture also may help, as the cat loses interest when he can’t get a good pull on the fabric.

Problem: Family members use different styles of dealing with the cat, some permissive, some overly strict.

Solution: Have everyone agree on house rules to reduce the cat’s stress. If the rule is no cats on the furniture, everyone has to keep cats off the furniture. “We need to be very clear in what we’re asking cats to do,” Dr. Perry says. “If you want your cat on your lap only during certain times, you need a clear signal that this is or is not the time. For example, drape a specific blanket on your lap to signal that it is OK for your cat to join you.”

Just remember that the cat is not irascible or out to ruin your furnishings, Dr. Houpt says. “He has needs that we may not have met. You and your cat will both be happier if he can mark his territory with impunity and be petted only where it really feels good.”