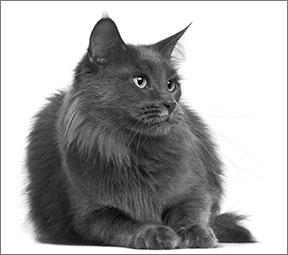 You know the sound. It’s as if your cat is coughing so hard he’ll turn himself inside out. Then out pops an object that has been revered in folk medicine, recounted by comedians and reviled by cat owners everywhere: a hairball.

The formal name for such a mass in the digestive system, bezoar (pronounced BE-zor), comes from Persian for “protection from poison.” Persian cats, however, have never been alone in developing bezoars. Cows, sheep, deer and antelopes are among the animals that develop bezoars from indigestible material in their cud.

In fact, according to the National Museum of Health and Medicine in Silver Spring, Md., European healers from the Middle Ages into the 1700s used Persian antelope bezoars as medicine, and cow bezoars are still used to treat mouth diseases in China.

Needing Attention. In cats, bezoars formed of hair — trichobezoars (trik-oh-BE-zors) — are not normal, but they’re also not necessarily bad. They can, however, signal that a cat needs a veterinarian’s attention. In extreme cases, they can even be life threatening.

“My dermatology cases have a high frequency of hairballs if they are fur-mowers — cats who lick their skin excessively both in frequency and intensity,” says dermatologist William H. Miller, VMD, Medical Director of the Cornell Companion Animal Hospital. “We rarely see ‘normal’ cats with hairballs.”

Research into hairballs is scant, Martha Cannon, BA VetMB, a feline specialist in Oxford, England, noted in a review in the Journal of Feline Medicine and Surgery. Scientists aren’t even sure of its incidence. Studies that she reviewed indicate that only 10 percent of healthy short-haired cats bring up two or more hairballs a year and 73 percent of short-haired cats never have them.

In another study, owners of long-haired cats reported twice as many hairballs as owners of short-haired cats. While long-haired breeds such as Persians and Maine Coons are among the breeds at greater risk for developing hairballs, it’s not uncommon for some cats to cough up a hairball once or twice a week. Kittens, who are just learning how to lick, develop fewer hairballs than well-practiced older cats.

The supposition is that many, perhaps most, cat owners view hairballs as a normal part of feline life and never mention them to a veterinarian.

Shedding Seasons. Cat hair is made of indigestible protein. Eventually, a hair stops growing, loosens and sheds. Loosened hair that’s licked free by cats’ rough tongues and is swallowed normally passes through the gastrointestinal tract. The amount is so small that the owner never notices it, though more hair and even small hairballs may show in the feces during the spring and fall shedding seasons. If the cat swallows more hair than the digestive tract can handle, a hairball may form in the stomach. The only way for the cat to get rid of is to cough it up.

“Some cats, because of their housing, degree of nervousness or medical conditions, have more telogen [no longer growing] hairs than the healthy well-adjusted house cat,” Dr. Miller says. “In these instances, the cat can swallow large amounts of hair. The mass of hair can irritate the stomach and the cat will vomit up the hairball. Large masses are called trichobezoars, and these can cause obstruction of the gut, requiring surgery.” These obstructive hairballs, he adds, are uncommon.

Nevertheless, owners should be alert for more than the occasional hairball, as well as failed attempts to cough up anything, lack of energy, decreased appetite, constipation or diarrhea.

“Cats with allergies or behavioral conditions can spend a lot of time licking 24/7/365,” Dr. Miller says. “They also may have subclinical gastrointestinal disease, which can make the development of hairballs more likely. The primary focus in these cats is to diagnose the underlying condition and resolve it. Sometimes that is easy, and sometimes it’s not. Sometimes it’s impossible.”

Underlying Causes. The possible underlying conditions comprise a serious list, including dietary intolerance, inflammatory bowel disease, lymphoma and other disturbances in the movement of food through the digestive tract.

Owners can help to prevent hairballs by brushing their cats daily. Long-haired cats may benefit from trimming their fur. Small meals seem to help because they empty faster from the stomach, reducing hair buildup, as do hairball-control treats and diets. The diets usually have added fiber to help the passage of hairballs and ingredients to improve skin and hair condition, which reduces shedding.

Over-the-counter hairball remedies with lubricants can move ingested hair smoothly along its path, too.
With a little attention, a cat should never have as bad a hairball day as Gemma, a ginger-color longhair who made headlines in January 2012 when a 5-inch-diameter, 7½-ounce hairball was removed from her stomach. Her veterinarians in Cambridgeshire, England, told local newspapers that her owners loved her but had not known how to groom her. With regular brushing and combing, they don’t expect to see a recurrence for the remaining eight of her nine lives. ❖