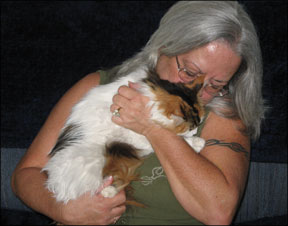 When Sarah* entered a battered womens shelter in Virginia with her three young children, she was frightened, exhausted and inconsolable. As she tried to flee her abusive husband, he had held the familys cat at knifepoint. She had to make a heart wrenching choice. “When he threatened one of my children, I had to leave [the cat],” Sarah tearfully explained to the shelter staff.

“A law enforcement officer was sent to the home immediately,”

relates Allie Phillips, J.D., director of public policy for American Humane, in Alexandria, VA, who witnessed the event at the shelter. “[The police officer] entered the home and found the husband passed out on the floor. The officer also found the cat, who had given birth to a single kitten.”

When Sarah was reunited at the shelter with her kitty and newborn kitten, “She broke down crying,” says Allie. “She said, Now, I have no reason to go back.”

Every Reason to Stay

In the United States, there are approximately 2500 shelters for abused women and children. Of these shelters, currently only eleven allow women to bring their pets with them. “We know from Hurricane Katrina that people would rather die than part with their pets,” explains Phillips, author and proponent of the American Humanes Pets and Womens Shelters (PAWS) program. “Weve found the same dynamic that occurred with Katrina, occurring with women suffering from domestic violence.” Up to 48 percent of women will delay leaving an abusive situation if they cant bring their pets, says Phillips. Twenty-five percent will not leave at all.

“My cat is my family,” explains Emily*, a survivor of domestic violence. Emily admits that if the shelter didnt have on-site housing for her orange and white tabby, Belle*, she would have delayed leaving in order to find safe housing for her kitty. “I would have tried to find a cat rescue organization,” she relates, noting that “it would have broken my heart” but she would have sacrificed this to make sure her cat was safe. (If Belle had been left behind, “[my abuser] would have gotten rid of her,” she says with conviction.)

Often, victims of domestic violence fear retribution from the abuser for leaving him but these women dont just fear for their own lives, but for the lives of those they love the deepest … and this includes their pets.

“When a woman is in an abusive situation, the batterer will hurt the things that mean the most to her,” explains Meredith Holland, director of My Sisters House, a domestic violence shelter in Rocky Mount, NC that has provided in-house shelter for residents pets since 2002. “Batterers will hurt the womans pet to manipulate her, to keep her from leaving them,” explains Holland. (Studies indicate that as many as 85 percent of women entering a domestic violence shelter related that their abuser had threatened, injured or killed the family pet.)

Before Holland became director of My Sisters House, she worked as a staff member. “At the time, [the shelter] did not take pets. Women would be crying because they couldnt bring their animals. It broke my heart,” says Holland. “The women who did enter the shelter were leaving with the knowledge that they had left a loved animal in a harmful situation – and many [refused shelter] because they just couldnt do it.”

As an animal lover, Holland set out to change this. “I dont think many people stop to think about the impact that pets make on our lives. We love our pets.” And, to a woman and her children who are leaving a violent situation with often no more than the clothes on their backs, being able to bring along the beloved family pet can bring untold comfort.

“It was very important for us to bring our cat with us,” relates Rhonda*, a survivor of domestic violence who was able to escape her abuser with her children to a womens shelter – along with their treasured domestic shorthair, Felix*. “My children have gone through a great deal,” she relates, noting that if the cat had not been able to stay with the family, “the kids would have been devastated.” Had the cat been left with the abuser, Rhonda is certain that his fate would have been awful: “Felix might have been hurt or not fed and starved to death.”

The greatest concern for womens shelters that are contemplating adding an on-site pet program to their facilities, which often are already strapped for funding, is the cost. However, according to Marci Sanders, director of operations for the Naples shelter, once an on-site pet program is initiated, theres virtually no cost involved to the shelter.

Sanders estimates that in 2008, the Shelter for Abused Women and Children took in 500 women and 300 pets. “The owners take care of their animals. We just monitor the pets care but theres no additional staff,” says Sanders. “Many residents do work, so if they can pay for their pets care, they do. If they cant afford to pay, we provide these services,” says Sanders.

And, the Naples community has been extremely generous in supporting the on-site pet program. “People have been more than happy to donate cat food, dog food, crates and kitty litter. We have a veterinarian who donates his services, and a grant from the Doris Day Animal Foundation to pay for any medications that might be needed.”

When advising other shelters that are considering adding an on-site pet program, Sanders says that another concern is what to do if a woman leaves and cant take her animal with her. “When a woman brings her pets here, she understands that she has a certain amount of days after shes left to take her pet with her before the animals will be put up for adoption at the humane society,” says Sanders. In the past six years, this has happened only twice, she relates, and both times staff members adopted the pet.

How You Can Help

“What its really going to take is for animal lovers to push this concept,” says Holland. If the domestic violence shelter in your area is directed by someone who recognizes the importance pets make in a persons life, then the shelter may be more receptive to an on-site program. But dont assume this is the case, cautions Holland: “Some shelters due to their size or location, physically cant house pets.”

If youre interested in initiating a pet program for your local domestic violence shelter, “Start by asking how you can help,” Holland recommends. “Does the shelter need foster homes for pets? Do you know a local kennel that might house a pet if you provide the pet food? These are all ways that can help.”

Sometimes a small move can pave the way for bigger changes, and if getting just one pet to safety means one more woman is able to leave a violent situation then the effort is well worth it.