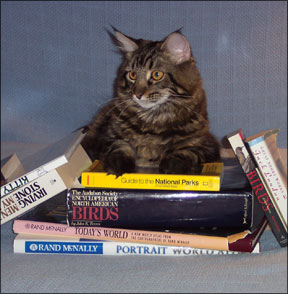 notes the following about cats: “Incredibly resourceful and self-reliant, the species has survived thousands of

years in radically different environments and living conditions. Even domestic cats will show a crafty, strong-willed and versatile nature.”

But how smart are cats? We humans are very biased in assessing the intelligence of our cats (or dogs). Thats because we tend to judge them according to traits that we can relate to as humans. When cats do something entertaining or “display their independence, we think of them as intelligent,” says Julia Albright, MA, DVM, animal behavior resident at Cornell Universitys College of Veterinary Medicine.

But there is actually far more evidence for cats intelligence than just our perception of it. According to researchers at Tufts University School of Veterinary Medicine, the physical structure of our brain and that of cats are very similar; they have the same lobes in the cerebral cortex (the “seat” of intelligence) as we do. Our brains function the same way, conveying data via identical neurotransmitters.

“Cats demonstrate an adaptable behavioral ecology, which is a sign of intelligence beyond instinct or conditioning,” says Dr. Albright. In the wild, cats are asocial: Adults live mostly solitary lives except when mating. (Female domesticated cats and lions are the only cat species that raise their young in groups.)

“But you see these cats coming together and socializing around resources, such as food or water,” says Dr. Albright. “For example, youll find that cats that normally live and hunt alone will learn to congregate and socialize at the fishing dock or a farm with grain and mice.” In other words, they learn the value of a social network.

How Cat Intelligence is Measured

Experts say no. You can train a cat, but its harder. Cats are not wired to please others as much as dogs are. They will only do tricks if there is something in it for them like a really good treat.

“Dogs have been selectively bred for centuries, whereas cats have been largely left to themselves. Therefore, we have selected for dogs that are usually eager to please us,” says Dr. Albright. “Cats are most definitely capable of being trained. Have you ever seen the Russian circus cats that jump through fire? I dont think people expect as much from cats as from dogs, so we dont even try. But if you do some training with your cat, its a great way to enhance the bond between you.”

Learning By Watching Other Cats

Cats learn through observation more proof of their intelligence. In fact, “Kittens that arent raised with other cats dont do the many common things that cats do,” says Dr. Albright. “Studies have shown that cats that had never killed rats can become rat killers by simply watching another cat kill a rat. Thats why we believe that kittens actually learn from their mothers what to hunt for food.”

One researcher explained how his own cat finally learned to use the litter box. For 18 months he had tried to litter-train his cat, but she didnt seem to get the point until she observed another cat using the litter box. From then on, she had no problem doing it herself.

Cats also learn by observing their human companions who often testify how their cats have learned to open room or cabinet doors, even managing to drop down from overhead shelves onto door knobs to turn and open them.

There is no doubt that cats are pretty smart when it comes to their memory, associative ability, behavioral adaptability and observation skills. As to whether cats are smarter than dogs or dogs smarter than cats it all comes down to this: Intelligence is in the eye of the beholder. v

Bacteria May Be Source of Scent